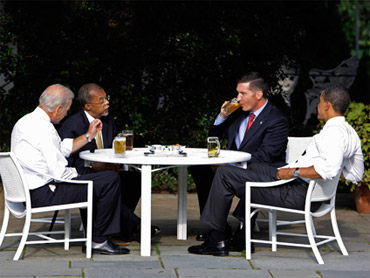 Michael Novak's latest book is No One Sees God.


After six months in the Oval Office, Pres. Barack Obama has a lower job-approval rating than did ten of the last twelve presidents at the same point in their presidencies. Rasmussen reports that the daily tracking poll of the president's popular standing shows eleven points negative: Twenty-eight percent "strongly approve" and 39 percent "strongly disapprove."

The support for his signature issue, health-care "reform," is falling by the day. The more that Americans learn about it, the more revulsion they feel against it. His big stimulus bill has not delivered what he said it would. A giveaway stimulus is the Democrats' usual alternative to tax cuts, on the theory of "increase demand" as opposed to "increase supply." Unemployment in a few important states has now soared to 17 percent, and nationally it has risen close to 10 percent.

Further, while Obama still ranks high in personal popularity, his numbers have fallen from percentages in the high 60s down to the low 50s, and are still dropping. His policies are much disliked: unimaginably high deficits, ever-greater state controls over industry after industry, a certain preference for raw leftist ideology over the needs and feelings of ordinary people.

For instance, Obama showed a cool insouciance recently in telling a televised citizens' forum that some older patients must hereafter consider whether the health care they are now receiving is really helping them, and perhaps begin to reconcile themselves to giving it up. This means condemning themselves to an earlier and perhaps more painful death. Is complete government control, even of the time of death, supposed to be "reform"?

In a recent dust-up between an African-American Harvard professor and a local Irish-American policeman (of high reputation), Obama made the foolish mistake in a press conference of defending his "friend," the black professor, and calling the local police (in the person of this one cop) "stupid."

The great class division in American life is no longer between the bourgeoisie and the proletariat (since there is no longer any proletariat, only one huge middle class). It is now between the highly educated elite and the ordinary people of family and neighborhood and common work. So, in calling the cop stupid, Obama pulled the veil back on his own Harvard arrogance. A huge public outcry forced him to step back and telephone both men in order to make peace. To make himself seem like an ordinary guy (the cop, not the professor), he even invited both men to the White House to have "a beer." Too late! This sudden flash of self-revelation about his own class consciousness was exactly what everyone had suspected for some time.

It was the sergeant who suggested having a beer together (not wine and cheese), and he was the coolest of the three in ordering a Blue Moon. (Blue is the color of cops, and Moon is real, real cool.) I gave the first two rounds to him. Then, in the third round, watching his dignity and unblinking integrity (with the strength of tens of thousands of policemen standing behind him), I gave him round three running away.

This iron-jawed Sergeant Crowley is the man they called racist and hotheaded and stupid. They got the wrong man. They made the wrong charge. The president and the professor came out of this with lower universal esteem, the sergeant with higher, far higher.

Thus, once again, below the president's honeyed, highfalutin ways of speaking, there is revealed a pretension that is becoming insufferable, a sense of moral and class superiority in office, which he has not yet earned. Moreover, when he is on his own, without speechwriters, Obama is surprisingly unimpressive. He is rambling, fairly boring, error-prone, evasive, and not well-informed.

In addition, President Obama seems to be unable to admit error, to apologize, or to voice what all can see to be true. "Calibrated" is a word he often hides behind, as when he brushed off his insulting remark about the Cambridge policeman - as if he, President Obama, did not use an inexcusable insult. No, the president's words were wrong, not just imprecisely "calibrated." Try to figure out the correct calibration of "stupid."

By Michael Novak
Reprinted with permission from National Review Online