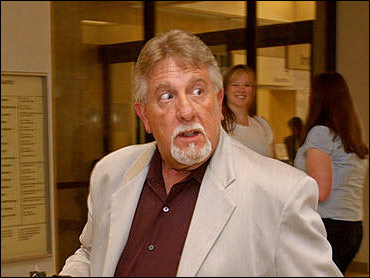 Though prosecutors in Scott Peterson's double-murder trial have said his Christmas Eve morning fishing trip seemed unusual and was simply a cover-up to dispose of his wife's body, Laci Peterson's stepfather acknowledged Tuesday that he, too, went fishing that morning.

Scott Peterson's father, Lee, marveled at the revelation as he later left the courthouse.

"I think Ron's comment early on was, 'Who goes fishing on Christmas Eve,' and lo and behold he went fishing," Lee Peterson said.

Scott Peterson, whose trial is in its second week of testimony, claims he went fishing at the Berkeley Marina the morning of Dec. 24, 2002, then came home to find his wife missing. His lawyers say someone abducted her while she walked in a nearby park and then framed Peterson after learning his alibi.

Prosecutors contend Peterson killed his wife in their Modesto home, then drove her body to San Francisco Bay and dumped it from his small boat.

The remains of Laci Peterson and her fetus washed ashore in April 2003 — not far from where Scott Peterson said he was fishing.

Peterson, 31, could face the death penalty or life without parole, if convicted.

Grantski testified that he was suspicious of Scott Peterson early on.

"I said, 'I think your Berkeley fishing trip is a fishy story. Did you do something else? Do you have a girlfriend?"' Grantski testified. "He said, 'No,' and he turned around and walked away."

Prosecutors claim Peterson's affair with a massage therapist was his motive for murder, but Grantski testified Peterson and Laci appeared to have a loving relationship.

Grantski took the stand a day after Laci Peterson's mother, Sharon Rocha, who also spoke of a seemingly loving relationship.

Both also indicated Scott Peterson was nearly emotionless throughout the search for Laci and shunned friends and family members trying to help, even avoiding the media as others tried to convince him he needed to get the word out.

Prosecutors have tried to portray this attitude as indifference and the actions of a guilty man, although Grantski acknowledged that Scott Peterson was not an emotional person.

Laci Peterson's brother, Brent Rocha, described how Peterson stayed away from the media as the search went on. Rocha said Peterson did not participate in a public vigil for his missing wife, staying off the stage as his own parents and Laci's family pleaded for the public's help.

Grantski had acknowledged earlier that Scott told him, "This isn't about me, this is about Laci," in explaining why he shied from the cameras.

Rocha said he told police he suspected Laci Peterson's ex-boyfriend might have been involved in her disappearance, adding he had heard the two had an abusive relationship.

"I was kind of hoping for infertility," she testified Scott told her, adding that she didn't take it as a joke.

Prosecutors have said Peterson was not ready to be a father and was looking for a way out.

However, Rocha's wife acknowledged that she told detectives in January 2003 that Scott and Laci seemed happy together.