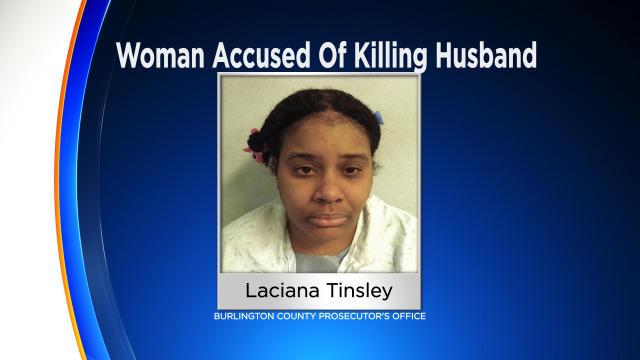 WILLINGBORO, N.J. -- A defense lawyer says a woman acted in self-defense when she fatally beat her husband with a fire extinguisher inside their New Jersey home.

Burlington County prosecutors say 42-year-old Laciana Tinsley is charged with murder and a weapons offense in the death of 74-year-old Douglas Tinsley. He was pronounced dead at the couple’s Willingboro home on Monday afternoon.

Burlington County Prosecutor Robert Bernardi said in a statement that an investigation revealed that Laciana Tinsley struck her husband in the head multiple times with a fire extinguisher, CBS Philadelphia reports.

A public defender who appeared with her at her initial court appearance on Tuesday said Douglas Tinsley was suffocating his wife at the time.

Laciana Tinsley will remain jailed until at least Friday. A judge will decide then whether to set bail or keep her in custody.

Prosecutors have filed a motion to keep Tinsley jailed.