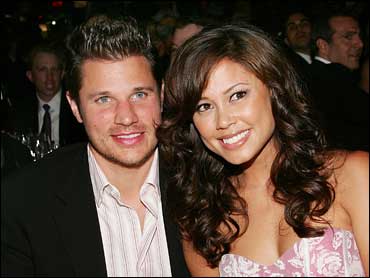 Nick Lachey and Vanessa Minnillo are talking about risqué photos of them that have surfaced in a tabloid magazine.

Shutterbugs snapped photos of the pair making out in a hot tub while on a private vacation in Mexico.

"This is the girl that I love," Lachey says. "It's tough to see someone you care about be unfairly judged. It's hard for me as a man to see my girl go through that. Everybody said it was a scandal. Where's the scandal? I was in Mexico with my girlfriend of a year, celebrating our anniversary on a private vacation. It's not like I was caught with a Mexican hooker."

Adds Minnillo: "It was embarrassing. But we have done nothing wrong."

On the relationship front, Lachey, whose divorce from ex-wife Jessica Simpson was finalized this time last year, tells the magazine that he and Minnillo are in a "real relationship" with "real feelings." Lachey also tells OK! that he and his ex haven't kept in touch.

Lachey says he learned a lot from his failed marriage.

Minnillo also opened up about the other photo scandal that she was involved in recently in which she and Lindsay Lohan were shown playing around with knives.

"It was a tough time. I want people to see me for who I am. When a photo like that gets more press than what you do, it's sad," she says. "Nick said to me, 'This is one bad chapter in a book of your life.' It was a period of seconds, over a year ago. Yes, of course, it was bad judgment. Yes, of course I was embarrassed."