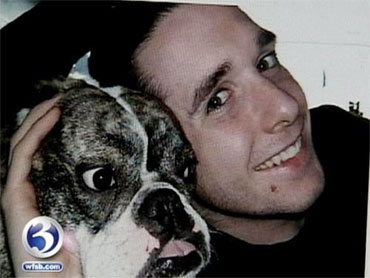 NEW HAVEN, Conn. (WFSB) Sources have identified the person of interest in the killing of a Yale Graduate Student as Yale lab tech Raymond Clark.

Sources told Eyewitness News that police are investigating 24-year-old Clark as a person of interest in the death of 24-year-old Annie Le.

The name on the mailbox at that address is "Ray Clark."

The manager of the apartment complex told Eyewitness News that no one has seen Clark since Thursday.

"We didn't know what was going on, we saw cops all around here," said neighbor Sana Cotten.

Sources told Eyewitness News that they believed Clark was inside his apartment Monday night. No search or arrest warrants had been issued for Clark or his apartment on Tuesday.

According to the Yale University directory, Clark works as a lab tech at the Animal Resources Center.

The remains of Le were found inside a wall the basement area of a Yale lab on Amistad Street on Sunday, Le's would-be wedding day. The area where Le's remains were found is used to store animals used for research.

Le was working in the Amistad Street building as a graduate student in pharmacology. The office where Clark worked is very close to where Le was performing her graduate work.

Students told Eyewitness News that the area is secure and that key cards must be swiped twice to access the area.

Le had been missing since Tuesday, when she was last captured by some of the school's 70-plus surveillance cameras entering the lab.

The medical examiner identified the remains as Le's on Monday, and said the release of the cause of death would be delayed to assist in the investigation.

Sources told Eyewitness News that police had identified a Yale lab technician as a person of interest in Le's killing. They said the technician had defense wounds on his chest and had failed a polygraph test.

Eyewitness News attempted to contact Clark, but he did not answer his phone.

On Saturday, bloodied clothing was found hidden in a drop ceiling in another part of the building. Police said they were testing to determine whether the clothing belongs to Le or someone else.

Le was remembered Monday night by hundreds at a candlelight vigil on the Yale campus. Many of those who attended the vigil said they didn't personally know Le, but were shook by here death.

"This is not a situation where we need to know her personally to feel it," said student Jordan Zimmerman. "I feel like she's one of us, whether we know her or not."

"That this horrible tragedy happened at all is incomprehensible, but that it happened to her is even more so," Powers said.

Le and fiance, Jonathan Widawsky, had planned to wed at the the North Ritz Club in Syosset, N.Y., on the north shore of Long Island. Police said Widawsky, a Columbia graduate student, was assisting in the investigation and was not considered a suspect. Le and Widawsky are described as college sweethearts, meeting as undergraduates at the University of Rochester. Le received her undergraduate degree from the University of Rochester in New York and majored in cell and developmental biology with a minor in medical anthropology. She conducted a summer project at the National Institutes of Health on bone tissue engineering using mouse mesenchymal stem cells, according to a biography posted on the NIH Web site. While at the University of Rochester, she conducted research involving parasitic wasps.

She is originally from California, and graduated from Union Mine High School in 2003, where she was named "Best of the Best" and "Most Likely To Be The Next Einstein."