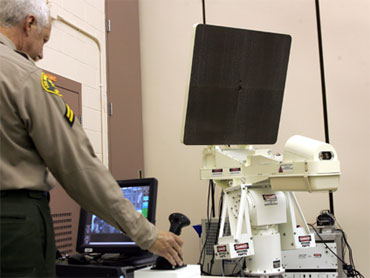 A device designed to control unruly inmates by blasting them with a beam of intense energy that causes a burning sensation is drawing heat from civil rights groups who fear it could cause serious injury and is "tantamount to torture."

The mechanism, known as an "Assault Intervention Device," is a stripped-down version of a military gadget that sends highly focused beams of energy at people and makes them feel as though they are burning. The Los Angeles County sheriff's department plans to install the device by Labor Day, making it the first time in the world the technology has been deployed in such a capacity.

The American Civil Liberties Union of Southern California criticized Sheriff Lee Baca's decision in a letter sent Thursday, saying that the technology amounts to a ray gun at a county jail. The 4-feet-tall weapon, which looks like a cross between a robot and a satellite radar, will be mounted on the ceiling and can swivel.

It is remotely controlled by an operator in a separate room who lines up targets with a joystick.

In 2008, CBS News correspondent David Martin reported on the military's development of a version of the gun for use in Iraq - and faced the weapon himself. He said it "felt like scalding water."

It's a gun that doesn't look anything like a gun: it's that flat dish antenna which shoots out a 100,000-watt beam at the speed of light, hitting anything in its path with an intense blast of heat.

An operator uses a joystick to zero in on a target. Visible only with an infrared camera, the gun, when fired emits a flash of white hot energy - an electromagnetic beam made up of very high frequency radio waves, Martin reported.

The ACLU said the weapon was "tantamount to torture," noting that early military versions resulted in five airmen suffering lasting burns. It requested a meeting with Baca, who declined the invitation.

The sheriff unveiled the device last week and said it would be installed in the dorm of a jail in north Los Angeles County. It is far less powerful than the military version and has various safeguards in place, including a three-second limit to each beam of heat.

The natural response when blasted - to leap out the way - would be helpful in bringing difficult inmates under control and quelling riots, the sheriff said.

But the sheriff was creating a dangerous environment with "a weapon that can cause serious injury that is being put into a place where there is a long history of abuse of prisoners," ACLU attorney Peter Eliasberg said. "That is a toxic combination."

Cmdr. Bob Osborne, who oversees technology for the sheriff's department, said the concerns were unfounded. He said he stood in front of the beam more than 50 times and that it never caused any sort of lasting damage.

"The neat thing with this device is you experience pain but you are not injured by it," Osborne said. "It doesn't injure your skin, the beam doesn't have the power to do that."

He said the device would be a more humane way of dealing with jail disturbances. Unlike hitting inmates with batons or deploying tear gas, a shot from the beam has no aftereffects, he said.

The device was made specifically for the sheriff's department by Raytheon Missile Systems. Sheriff's spokesman Steve Whitmore said its $750,000 cost was paid for by a Department of Justice technology grant.

After a six-month trial, the sheriff will determine if the device is effective and if it should be deployed in other jails.

"When this pilot program is done, the realistic hope is it will accomplish not only what the sheriff's department wants but what the ACLU wants, which is to save lives harmlessly," Whitmore said.

Angelica Arias, an attorney with the county's Office of Independent Review, which monitors the sheriff's department, said only deputies with special training would be able to use the device and a video would be automatically recorded each time it is operated.

"Based on the level of scrutiny the department has put on itself and its training, it doesn't appear there would be too much wiggle room for misuse," Arias said.

Child and woman found dead after plane wreckage discovered in Gulf of Mexico
Thanks for reading CBS NEWS.
Create your free account or log in
for more features.
View CBS News In
CBS News App Open
Chrome Safari Continue
Be the first to know
Get browser notifications for breaking news, live events, and exclusive reporting.