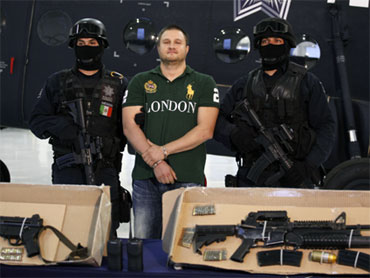 A Texas-born fugitive known as "the Barbie" grinned Tuesday as police paraded him in handcuffs and described his alleged life of luxury and savagery - cut short when he became the third suspected drug lord to fall in Mexico in the past 10 months in a coup for President Felipe Calderon's war on cartels.

Edgar Valdez Villarreal, is a former Texas high school football player who allegedly jumped into the world of Mexican drug cartels and gradually rose through the ranks.

He who got his improbable nickname for his green eyes and fair complexion, is wanted in the U.S. for allegedly smuggling tons of cocaine. In Mexico, he is blamed for a brutal turf war that has included bodies hung from bridges, decapitations and shootouts as he and a rival fought for control of the divided Beltran Leyva cartel.

As he was displayed to reporters on Tuesday, he still wore the green polo shirt in which he was captured the day before. He shifted his weight and smiled often as police described a high-flying and violent life.

Security forces had been closing in on Valdez for over a year. Their biggest breakthrough was the death of his boss, Arturo Beltran Leyva, in a December shootout with marines, Federal Police Commissioner Facundo Rosas said at the news conference.

The arrest of several of Valdez' allies, U.S. intelligence tips and other sources provided evidence that Valdez had left his home of 10 years in the resort of Acapulco - where he owned at least one posh bar that was raided in 2009 - to lead a lower-profile life in wealthy neighborhoods of Mexico City, Rosas said.

Mexican security officials began getting hits on Valdez's whereabouts six weeks ago and approached U.S. officials for help, according to U.S. law enforcement officials in Washington, who spoke on condition of anonymity because of the sensitivity of the case They said intelligence from U.S. agents helped lead to his arrest.

Mexican federal police nearly nabbed Valdez during a raid in an upscale neighborhood of the Mexican capital on Aug. 8. He got away, Rosas said, but police found clues there that led them to a woody weekend getaway just outside the city where he was finally caught Tuesday by an elite squad of federal police trained abroad.

His U.S. lawyer, Kent Schaffer, said Valdez's girlfriend and her mother were both arrested in recent Mexican operations, he said.

"This has been going on for quite a while. They raided several of his homes. They detained his girlfriend's mother at one of his homes about three weeks ago," Schaffer told The Associated Press. "So you figure it's just a matter of a time."

Valdez and four other people - described by police as Valdez's inner security circle - were pulling into the driveway when they were arrested, Rosas said in an interview with MVS radio. Although he had two guns and a grenade launcher, Valdez didn't resist because police "never gave him the opportunity," Facundo said.

Another of his associates with killed during a shootout with police outside a shopping mall in the city.

Facundo said Valdez was found with three unostentatious compact cars - evidence that he had tried to lay low as security forces hunted him.

Calderon called Valdez "one of the most-wanted criminals in Mexico and abroad" in a Tweet. He vowed that authorities will continue to chase the rest of his gang.

Valdez, 37, was charged in May in U.S. District Court in Atlanta with distributing thousands of pounds of cocaine from Mexico to the eastern U.S. from 2004 to 2006.

U.S. authorities had offered a reward of up to $2 million for information leading to his capture, and the Mexican government offered a similar amount. But Facundo said security forces nabbed Valdez on their own, and there would be no reward.

Mexican authorities had not decided on any extradition plans.

Schaffer said Valdez is an illegal immigrant in Mexico and could be deported.

"He was born and raised in Texas. His family's here. There's no Mexican citizenship at all," Schaffer told The Associated Press. "Mexico may not be so eager to hand him over, but it would be the smartest thing for Mexico to do politically."

Facundo said deportation was a possibility but that police would prefer that he first face justice in Mexico for several dozen murders he is suspected to be behind. However, he said the final decision would be up to the federal Attorney General's Office.

Schaffer said Valdez' safety could be compromised in a Mexican prison.

"I'm sure there's a whole lot of people that are hoping that he would have been killed rather than captured," he said.

Mexican authorities say Valdez has been battling for control of the Beltran Leyva cartel since Arturo Beltran Leyva was killed in a December shootout with marines in Cuernavaca, a favorite weekend getaway south of the Mexican capital.

Valdez's fight against Hector Beltran Leyva - a brother of Arturo - has made a battleground of what was once a relatively peaceful pocket of the country and brought the drug war ever closer to Mexico City. Their fight also has spread westward toward the resort city of Acapulco.

The U.S. State Department says Valdez headed a group of assassins for the Beltran Leyva gang. He "is the person most responsible for pushing the battle into central and southern Mexico," the department says on its website.

Two other Beltran Leyva brothers have been arrested under President Felipe Calderon, who in 2006 deployed thousands of federal police and soldiers to fight drug traffickers in their strongholds.

Drug-gang violence has surged since the offensive began, claiming an unprecedented 28,000 lives. But the crackdown has brought down several major traffickers.

But Calderone's crackdown is thought to actually be making the violence worse because cartels are splintering and power struggles erupting, reports CBS News correspondent Ben Tracy. In the past week, 14 people were found dead here in acapulco, two mexican mayors were killed and 72 migrants were found dead 100 miles south of Texas, the worst mass killing in the drug wars. Mexico's President says the cartel threat "has to be met head on," but they'll be doing it with fewer police officers. On Aug. 30, 3,200 of them were fired because of corruption.

Aside from the Beltran Leyvas, drug lord Ignacio "Nacho" Coronel was killed in a gunbattle last month when soldiers raided his home in Guadalajara. Coronel was the No. 3 in the Sinaloa cartel, one of the world's most powerful drug trafficking gangs.

Valdez was born in the border city of Laredo, Texas, and belonged to the Sinaloa cartel until the Beltran Leyvas split off in 2008 - one of many divisions among Mexican cartels in recent years that have fueled gang violence.

Experts said Valdez's capture could be especially valuable because of the intelligence he might provide on other top traffickers, including Sinaloa chief Joaquin "El Chapo" Guzman, Mexico's most-wanted drug lord.

"Because they caught La Barbie alive, he will be a very important source of information against El Chapo," said Raul Benitez, a professor at the National Autonomous University of Mexico who studies the drug trade. "La Barbie was once the bodyguard of El Chapo Guzman."

Facundo said Valdez has already provided police with new insight into the raid in which Arturo Beltran Leyva died. Valdez told police that Beltran Leyva called him as marines were closing in and that he had urged the capo to turn himself, advice the drug lord apparently ignored, Facundo said.

After that, Facundo said, the Beltran Leyva gang started suspecting that Valdez had tipped authorities to Beltran Leyva's whereabouts. Facundo did not say whether those suspicions might have been true.

Much of the most recent violence in central Mexico has been directed at Valdez's allies.

The decapitated bodies of four men were hung from a bridge in Cuernavaca last week, along with a message threatening allies of "La Barbie" and signed by the gang led by Hector Beltran Leyva. Two more bodies were hung from bridges near Acapulco later in the week, although no gang claimed responsibility.

Benitez said the violence in the region could drop over time, as the government has disrupted Valdez's crusade to create a new cartel from his split with the Beltran Leyvas. But it won't initially, he added, because gang lieutenants always fight for control immediately after a big boss is brought down.

U.S. prosecutors say they used a federal wiretap from a related case in Atlanta in January 2008 to identify Valdez as the source of thousands of kilograms of cocaine that were imported into the U.S. from 2004 to 2006.

Witnesses said some truckloads traveling from Laredo to Atlanta carried more than 650 pounds of cocaine. The workers sent shipments of money, often containing several million dollars in cash, back to Mexico in tractor-trailer trucks, according to the court records.