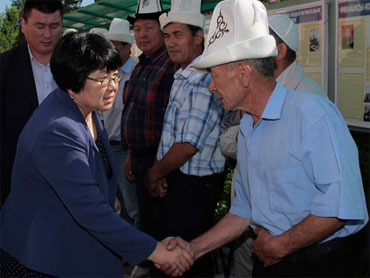 International observers on Monday praised Kyrgyzstan's constitutional referendum, saying the vote was conducted in a transparent and remarkably peaceful manner despite a lingering climate of fear after ethnic purges.

While the Organization for Security and Cooperation in Europe recognized some shortcomings in the vote, its approval was the final stamp of legitimacy for the interim authorities who came to power after President Kurmanbek Bakiyev was ousted in mass protests in April.

More than two-thirds of the 2.7 million eligible to vote in this Central Asian nation overwhelmingly approved a new constitution that reduces presidential power and hands more authority to parliament. The referendum was seen as a barometer of national trust in interim President Roza Otunbayeva's rule.

Many feared the referendum would reignite the kind of violence that saw hundreds of ethnic Uzbeks killed and many thousands more displaced earlier this month when majority Kyrgyz rampaged through minority Uzbek neighborhoods in the country's south.

"Considering the extremely difficult environment in which the referendum took place - only weeks after the violence in Osh and Jalal-Abad - the provisional government and other authorities should be commended for organizing a remarkably peaceful process," Boris Frlec, head of the OSCE observation mission, said in a statement.

Shortcomings the group noted included a lack of safeguards against multiple voting, with voters not always checked for ink on their fingers, and polling panels at times being unaware of procedures.

"The pervasive atmosphere of fear and intimidation in parts of the south, compounded by arrests of prominent public figures of the Uzbek community, may have dissuaded some voters from casting their ballots," the statement said.

Otunbayeva said she now would be inaugurated as a caretaker president and form her government and parliamentary elections will be held in October. But the fractured makeup of the interim government may put the nation's stability at risk.

Several of her top deputies also lead their own political parties, which will face off against one other in the parliamentary vote.

Otunbayeva has asked them to resign from the government by July 10 in order to ensure a level playing field for the elections.

As caretaker president, Otunbayeva will have sweeping powers in the three months before the elections, including the right to appoint ministers, issue presidential decrees and influence state media, a role that could open her party to criticism of having an unfair advantage in the political campaign.

Deep internal divisions already emerged among the interim leaders over how best to handle the violence in the south, when rampages by Kyrgyz mobs killed as many as 2,000 people this month and forced 400,000 minority ethnic Uzbeks to temporarily flee.

The provisional authorities had accused Bakiyev's followers of instigating the recent attacks to try to stop the referendum, a charge that Bakiyev, now living in Belarus, denied. But they have done little to follow up on reports that Kyrgyz security forces were also involved in the violence or turned a blind eye.

This has sown distrust toward police among many Uzbeks, who have nevertheless supported the interim government in the hope that it will create stability. The Kyrgyz community in the south backed Bakiyev, whose regime was seen as corrupt.

Voters in the southern city of Osh - the epicenter of the unrest - sounded upbeat early Monday.

"We hope, we must hope for something so that our children will live better. We believe in Roza Otunbayeva. She can understand what life we have, and she can make it better to live together with people of all nationalities," Gulnara Nasyrova told Associated Press Television News.

For the first time since the rioting, the streets in Osh were buzzing with activity Monday as some shops and restaurants began to operate again. But many of the most popular eating spots were run and owned by Uzbeks in this Silk Road city, and they still stand gutted by arson.