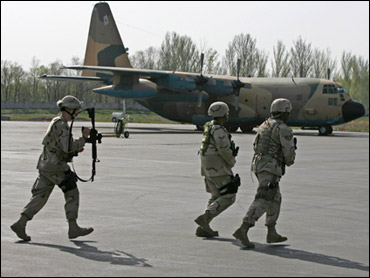 The United States has agreed to more than triple the rent it pays to continue use of an air base in Kyrgyzstan crucial to operations in Afghanistan, under a deal approved Tuesday by a Kyrgyz parliamentary committee.

The accord continuing U.S. use of the Manas base as a "center of transit shipments" comes four months after the Central Asian nation ordered the eviction of U.S. troops.

The deal appears to give U.S. forces unfettered access to transporting weaponry and ammunition via the base - providing a much-needed boost as the U.S.-led coalition ramps up operations against increasingly bold Taliban and al Qaeda fighters in Afghanistan.

Foreign Minister Kadyrbek Sarbayev told lawmakers that, under the new one-year deal, rent will increase to $60 million per year from the current $17.4 million. Washington will also pay $37 million to build new aircraft parking slots and storage areas, plus another $30 million for new navigation systems.

The deal now goes to the full Kyrgyz parliament, where approval is possible by the end of the week.

The U.S. Embassy in Bishkek called the Kyrgyz government's decision a crucial boost for coalition forces.

"We applaud the decision by the Kyrgyz Republic to continue to play a key role as the international community broadens and deepens its commitment to bringing stability and security to Afghanistan and the region," spokeswoman Michelle Yerkin said.

President Kurmanbek Bakiyev stunned Washington in February by announcing that U.S. forces would be evicted from Manas, saying Washington wasn't paying enough and citing other concerns.

In addition to the annual rent, the base also contributes $150 million to the local economy every year through service contracts and aid packages, and around 600 locals are employed there, according to American officials.

As the Aug. 18 eviction date approached, however, Kyrgyz officials suggested they might reconsider.

The breakthrough deal followed a recent message sent by President Barack Obama that thanked Bakiyev for Kyrgyzstan's support of U.S.-led military operations in Afghanistan, according to Kyrgyz officials.

Kyrgyzstan is worried about the deteriorating situation in Afghanistan and Pakistan, and the possibility that it could destabilize the entire Central Asia region, the foreign minister told lawmakers Tuesday. It was a stark reversal of earlier official statements citing improving Afghan security as a reason for closing Manas.

Militants have stepped up attacks on the main route for U.S. military supplies to Afghanistan through Pakistan - although the military maintains this has little impact on its operations.

Manas' outgoing commander said the past year has been the busiest for the base because of the situation in Afghanistan. Col. Christopher Bence said last week that 189,000 personnel had been sent to and from Afghanistan through Manas in the past year. There were 6,370 flights from the base, and it refueled aircraft with 204 million pounds of fuel, he said.

Strictly offensive missions from Manas may be phased out under the new agreement, though observers doubt the U.S. would have entirely agreed with that.

"At the moment, they are only talking about a transshipment of nonmilitary goods," said Paul Quinn-Judge, of the International Crisis Group. "But I would not be surprised ... if there was eventually a cosmetic agreement that allowed the U.S. to fly its tankers out of there."

U.S. forces have had access to Manas outside Bishkek since 2001. The base became even more important to the Afghan war effort after neighboring Uzbekistan evicted U.S. troops from a base there.

Bakiyev's eviction announcement in February came hours after Moscow pledged more than $2 billion in aid, loans and investment for Kyrgyzstan. Russia has long been wary of the U.S. presence in Central Asia, and U.S. officials suggested Moscow had pressured Bakiyev to kick out the Americans.

Russia also has an air base in Kyrgyzstan.

Analysts and opposition politicians have said recently that Russia might be linking its backing for the U.S. in Kyrgyzstan to other nettlesome issues in U.S.-Russian relations, such as NATO expansion into former Soviet republics or U.S. plans for placing a missile defense shield in Central Europe.

"This decision tells us that the Kyrgyz government is not in charge of its own foreign policy but is just a plaything in the hands of the Kremlin," said Bakyt Beshimov, leader of the opposition Social Democrat party faction.