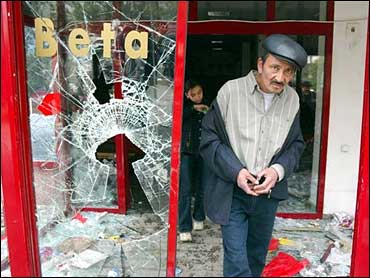 Both the United States and Russia have military bases near Bishkek, the capital of this strategically important Central Asian nation - sandwiched between China's northwest border and Russia's eastern border, with Afghanistan just one country away.

Kyrgyzstan was annexed by Russia in 1864 and returned to independent status in 1991, with the breakup of the Soviet Union.

The U.S. has 1,000 troops at its Krygyzstan base. Asked Thursday whether the situation poses a hazard to Americans, U.S. Secretary of Defense Donald Rumsfeld said he does not believe U.S. forces will be harmed by the turmoil.

In Washington Thursday, Secretary of State Condoleezza Rice said the upheaval in Kyrgyzstan could wind up a democratic success story if political change occurs without violence.

"This is a process that's just beginning. We know where we want to go," Rice said.

Russia meanwhile is saying it would not object if the ousted president, Akayev, wants to go to Russia.

He's reportedly now in neighboring Kazakhstan, with his family.

Russian President Vladimir Putin says the situation in Kyrgyzstan is the result of the authorities' weakness and the social and economic problems that had accumulated there.

In Bishkek Friday, opposition leader Bakiyev addressed a crowd of about a thousand supporters in the city's central square, announcing his new status as the nation's acting leader and proclaiming: "Freedom has finally come to us."

Bakiyev's appointment as acting president was endorsed by a newly restored parliament of lawmakers who held seats before the elections, which fueled protests against longtime leader Akayev and his government.

Bakiyev urged opposition supporters not to allow looting, and stressed that the popular opposition figure Kulov would coordinate law enforcement. Bakiyev proposed that former Foreign Minister Roza Otunbayeva be named the country's top diplomat, and said, "All intergovernmental agreements will remain in full force and are in full effect."

The new leadership faces an immediate challenge in halting vandalism and looting that left major stores in the capital, Bishkek, gutted and many others damaged by rowdy youths who roamed the city overnight, with few police to be seen.

Bakiyev said he would fight corruption - a major complaint against Akayev's regime - and the clan mentality that roughly splits the country between north and south.

"I will not allow the division of the people into north and south," he said. "We are a united nation."

Earlier this week, opposition protesters seized control of the presidential and government headquarters. The takeover followed weeks of protests over disputed parliamentary elections critics said were aimed at keeping Akayev in power.

The Red Cross reported dozens injured in the turmoil Thursday, while lawmaker Temir Sariyev said three people had been killed and about 100 injured overnight.

On Friday, a shopping center on the main avenue stood mostly destroyed by fire and strewn with wreckage that spread into the street, as smoke hung in the air. At another shop gutted by fire, a few elderly people and children picked through what was left after looting overnight. Cars were picked clean, their windows and tires gone.

"It was marauding youth, vandalism, a nightmare," said a store security chief who identified himself only by his first name, Rasim.

Student Ilya Mamutkulov said Akayev should have paid more attention to his country's opposition before this week's upheaval.

"It's a shame for Askar Akayev, he escaped from his people," he said, speaking English. "If he would be a good leader, he would talk to the opposition before this happened."

"I was against violence, I was for peaceful protest like in Ukraine, I didn't want any kind of violence," he said, but added that the government "really pissed us off."

The 60-year-old Akayev had led Kyrgyzstan since 1990, before it gained independence in the Soviet collapse.