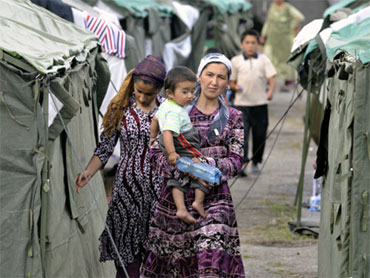 The U.N. has found evidence of bloody intent behind the chaos in Kyrgyzstan that killed hundreds, left the nation's second-biggest city a smoldering ruin and sent more than 100,000 ethnic Uzbeks fleeing.

The declaration by the U.N. that the fighting was "orchestrated, targeted and well-planned" - set off by organized groups of gunmen in ski masks - bolsters government claims that hired attackers marauded through Osh, shooting at both Kyrgyz and Uzbeks to inflame old tensions.

Kyrgyzstan's interim leaders have blamed the former president's inner circle for igniting the unrest - the worst ethnic violence to hit Central Asia in 20 years. The bloodshed has eroded the provisional government's grip on power and threatens a crucial referendum planned for later this month.

At a hospital near Osh on Tuesday, dozens of wounded Uzbeks lay in corridors and on broken beds, and many said the rampages were premeditated.

"Well-armed people who were obviously well prepared for this conflict were shooting at us," said Teymurat Yuldashev, 26, who had bullet wounds of different caliber in his arm and chest. "They were organized, with weapons, militants and snipers. They simply destroyed us."

Over 100,000 Uzbeks have fled for their lives to neighboring Uzbekistan, and tens of thousands more, most of them women and children, were camped on the Kyrgyz side or stranded behind barbed-wire fences in a no man's land.

The International Committee of the Red Cross had no precise figure of the dead, but spokesman Christian Cardon said "we are talking about several hundred."

Kyrgyzstan's interim President Roza Otunbayeva also said the real toll was likely "several times higher" than the official count of 179 people killed, because many victims were quickly buried by their relatives in keeping with Muslim tradition. Nearly 1,900 have been wounded, the Health Ministry said.

Otunbayeva said she talked again with Russian President Dmitry Medvedev about sending in troops, a move Moscow had refused over the weekend. Both the U.S. and Moscow have air bases in the strategically located nation, but they are in the north, far from the rioting.

Otunbayeva's government, which took over when former President Kurmanbek Bakiyev was ousted in an April uprising, has claimed that Bakiyev's family instigated the violence to halt a June 27 referendum on a new constitution. The provisional authorities need the vote to gain legitimacy and lay the groundwork for parliamentary elections scheduled for October.

The fertile Ferghana Valley was arbitrarily split between Uzbekistan, Kyrgyzstan and Tajikistan by Soviet dictator Josef Stalin, a situation that has fomented ethnic tensions for decades. In 1990, hundreds were killed in a land dispute between Kyrgyz and Uzbeks in Osh, and only the Soviet army deployment quelled the fighting.

Uzbeks generally have been better off economically and owned many stores and cafes in Osh and other southern cities, making them enviable targets for mobs of young jobless Kyrgyz men. Most Uzbeks also backed the interim government, hoping to win more political rights, while many Kyrgyz in the south have supported Bakiyev and worried that their interests would suffer under the new leadership.

U.N. High Commissioner for Human Rights Navi Pillay said the fighting appeared to be "orchestrated, targeted and well-planned," and she urged authorities to act before it spread.

Kyrgyzstan's deputy security chief, Kubat Baibolov, said people close to Bakiyev's family hired gunmen from neighboring Tajikistan, who drove around Osh in cars with tinted windows opening fire on both Uzbeks and Kyrgyz to inflame tensions. Some of the suspected gunmen have been detained and told authorities they were hired by Bakiyev supporters to start the deadly rampages, he said.

From self-imposed exile in Belarus, Bakiyev has denied any ties to the violence, but Otunbayeva insisted Tuesday his supporters had stoked the conflict.

"Many instigators have been detained and they are giving evidence on Bakiyev's involvement in the events. No one has doubts that he is involved," she said.

The region around Osh, a city of 250,000, is a top conduit for heroin flowing out of Afghanistan, and thus a hotbed for gangs and guns. Some observers said the violence could have been rooted in the fight for control over drug trafficking.

Mars Sariyev, a Bishkek-based analyst, said figures from Bakiyev's entourage might have encouraged the ethnic violence in order to regain control over the drug flow.

Bakiyev's regime faced widespread allegations of corruption and his family members grew wealthy and powerful while he was president from 2005 until his ouster in April.

In Washington, State Department spokesman P.J. Crowley said the top U.S. diplomat for south and central Asia, Robert Blake, had been dispatched to the region to assess the situation and weigh aid requests by Kyrgyzstan.

The United Nations and the European Union urged Kyrgyzstan not to let the violence derail the June 27 constitutional referendum and parliamentary elections scheduled for October. "The referendum and the elections must be held at the announced times" so Kyrgyzstan moves further toward democracy, U.N. representative Miroslav Jenca said in the capital, Bishkek.

The scale of the damage was so vast in the south it was hard to see how a legitimate vote could be held in less than two weeks. Up to 200,000 people have fled violence within Kyrgyzstan since Thursday, U.N, refugee agency spokesman Andrej Mahecic said in Geneva.

Several thousand refugees waited in squalid conditions Tuesday near one border crossing on the Kyrgyz side near Osh, with more people arriving by the hour. Heavy rainstorms overnight soaked makeshift tents made from carpets, and the air resounded with the sounds of crying women and children.

"There is no humanitarian assistance, no water. This is worse than living like an animal," said Fedya Okramov, 21, who had taken refuge under a tree with nine relatives.

An AP photographer in the southern town of Nariman saw 10 buses and trucks filled with Uzbek refugees heading toward the border Tuesday in just 10 minutes.

Tens of thousands of Uzbeks are now in 30 different refugee camps in Uzbekistan. The ICRC said Uzbekistan was overwhelmed by the number of refugees. Uzbekistan said Tuesday it had let in more than 100,000 refugees and denied shutting the border.

Clashes continued in and around Osh on Tuesday. Interior Ministry troops patrolled Jalal-Abad, about 45 miles from Osh, but city spokeswoman Klaya Tapkeyeva said the region was still not safe.

The deadly rampages began late Thursday, as mobs of ethnic Kyrgyz torched homes and businesses of ethnic Uzbeks. Many sections of Osh were burned to the ground as the violence spread into surrounding towns and villages.

"Our only fault is that we are Uzbeks," Osh resident Anvar Zakirov said, pointing at his burnt Uzbek neighborhood. "We did not attack anyone, we just defended ourselves."

He and other Uzbek residents who stayed to look after a few houses left intact after rioting, said they had only enough food and water for a couple of days.

Some aid was trickling in: A Kyrgyz government plane flew 40 tons of emergency supplies from Bishkek to Osh on Tuesday and carried civilians from the area on its flight back.

"What we need above all is an improved security situation on the ground around Osh to prevent further loss of life and to allow access so that humanitarian needs can be properly assessed and tackled," the U.N.'s top relief official, John Holmes, said in a statement.