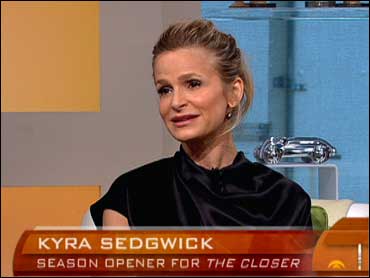 Actress Kyra Sedgwick won a Golden Globe last year for her starring role as a brilliant, but flawed, investigator Brenda Lee Johnson on cable's number one series, "The Closer."

Sedgwick was born and raised in New York, but she convincingly plays a southern woman, accent and all. She said her character is appealing - warts and all.

"I think it's her flaws. I think it really is," she said. "She's brilliant at her job and really not so great in her personal life. She's just kind of a mess. She understands -- she has this great intuition about people and absolutely none about herself. And she is just struggling to try to keep it all together. I think we're all trying to juggle it all. And she's also funny."

This season Brenda is engaged, and Sedgwick said to expect the couple to have conflicts.

"But, there's also a lot of love and a lot of, you know, a lot of connection between the two of them," she said. "The show, we always have a theme every year. The theme this season is power. For Brenda, this whole year is about powerlessness, when you feel powerful and think you are powerful and are not."

Sedgwick is thrilled about the Golden Globe she won last year, but she learned she can't leave it out on her mantelpiece.

"It gets light and it starts to darken and it is not as golden anymore," she said. "Apparently everybody knew that but me. I had it on my mantel for a long time and now it's changed color. (The award) is a real vote of confidence that means you're doing work that's meaningful for people. It's really nice."

Sedgwick admits that she had no idea the show would become such a huge hit when she started four years ago.

"I had little expectation," she said. "I think sometimes when you go into things that way you'll have the greatest glory."