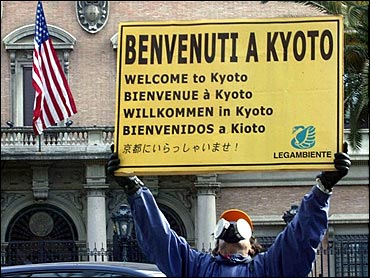 The Kyoto global warming pact went into force Wednesday, seven years after it was negotiated, imposing limits on emissions of carbon dioxide and other gases scientists blame for rising world temperatures, melting glaciers and rising oceans.

The agreement, negotiated in Japan's ancient capital of Kyoto in 1997 and ratified by 140 nations, officially went into force at midnight New York time.

Environmental officials, gathered in the convention hall where the accord was adopted, hailed the protocol as a historic first step in the battle against global warming and urged the world to further strengthen safeguards against greenhouse gases.

"Today is a day of celebration and also a day to renew our resolve ... to combat global warming," said Hiroshi Ohki, former Japanese environment minister and president of the conference that negotiated the protocol.

The protocol targets carbon dioxide and five other gases that can trap heat in the atmosphere, and are believed to be behind rising global temperatures that many scientists say are already disrupting the Earth's environment and weather patterns.

The United States, the world's largest emitter of such gases, has refused to ratify the agreement, saying it would harm the economy and is flawed by the lack of restrictions on emissions by emerging economies China and India.

"With the role the United States has taken on as world leader, the pressure is on the U.S. to set targets as the European Union has done," CBS News Foreign Affairs analyst Pamela Falk said.

"We have been calling on the United States to join. But the country that is the world's biggest emitter has not joined yet, and that is regrettable," Japan's top government spokesman, Chief Cabinet Secretary Hiroyuki Hosoda, told reporters.

Australia, the only other developed nation not to join, defended that decision, with Environment Minister Ian Campbell saying the country was nonetheless on track to cut emissions by 30 percent.

"Until such time as the major polluters of the world including the United States and China are made part of the Kyoto regime, it is next to useless and indeed harmful for a country such as Australia to sign up," Australian Prime Minister John Howard said in Canberra.

The Kyoto agreement was delayed by the requirement that countries accounting for 55 percent of the world's emissions must ratify it. That goal was reached last year — nearly seven years after the pact was negotiated — with Russia's approval.

"We will continue efforts aimed ... at taking into account the problems stemming, in particular, from the fact that this document does not cover all dynamically developing regions," Fedotov was quoted as saying by the Interfax news agency.

Russia ratified the treaty but only after intense debate among top Kremlin officials about whether the pact would harm Russia's growing economy.

In Japan, a tireless supporter of the pact, the enactment was being met with a mixture of pride and worry that the world's second-largest economy is unprepared to meet its emissions reduction targets.

As officials, environmental experts and activists gathered in Kyoto to celebrate the enactment, speakers urged nations to move ahead with plans to adapt to climate change, which many consider to be inevitable.

Joke Waller-Hunter, the Dutch chief of the treaty secretariat, said that while the Kyoto agreement was already having an impact on greenhouse gas admissions, it was only a first step that must be followed up with stronger agreements once it expires in 2012.

"We have good reasons to celebrate," she said. "At the same time we must realize that the Kyoto Protocol is ... not enough to deal with the problem."

Its targets vary by region: The European Union is committed to cutting emissions to 8 percent below 1990 levels by 2012; the United States agreed to a 7 percent reduction before President George W. Bush denounced the pact in 2001.

That proposal was opposed by the U.S. Senate so adamantly that the protocol was never submitted for ratification by then-President Bill Clinton. Mr. Bush pulled the United States out of the pact in March 2001, less than three months after taking office, saying it would have cost far too much and exacerbated an already bothersome energy problem for the world's largest consumer of energy from fossil fuels such as coal and petroleum.

The Bush administration also contended that complying with the treaty would cost millions of jobs, and vowed to confront the problem on its own terms, reports CBS News Correspondent Peter Maer.

White House spokesman Scott McClellan said Tuesday that "we are still learning" about the science of climate change. In the meantime, McClellan said, "We have made an unprecedented commitment to reduce the growth of greenhouse gas emissions in a way that continues to grow our economy."

The Bush administration's stance has since drawn fire from environmental experts, who say it is ignoring scientific consensus about global warming, and that government reports have been censoring views not in line with its policies.

Wangari Maathai, 2004 Nobel Peace Prize laureate and deputy environment minister of Kenya, said that while some countries had not ratified the treaty, there were still many of those nations' citizens who were making a difference in their own individual efforts.

"They have enormous conviction and have taken personal steps to reduce emissions of greenhouse gases," Maathai said.

Japan is struggling to find ways to meet its obligations. A report this month by the Ministry of Economy, Trade and Industry showed that 11 of 30 top Japanese industries — steel and power among them — risked failing to reach targets unless they take drastic steps.

Officials made solemn pledges Tuesday to fulfill Japan's treaty requirement to cut emissions of carbon dioxide and other gases by 6 percent below 1990 levels by 2012.