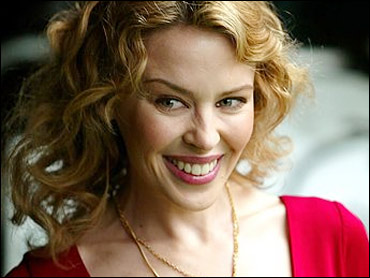 Australian pop star Kylie Minogue announced Tuesday that she has breast cancer, saying in a written statement that she's postponing her current concert tour to seek treatment and apologizing to fans.

Minogue's management company that the 36-year-old's diagnosis was confirmed this week during a visit to the southern Australian city of Melbourne, her hometown.

"Whilst at home in Melbourne with her family this week prior to her Australian Showgirl Tour, Kylie was diagnosed with early breast cancer," the statement said. "She will undergo immediate treatment and consequently her Australian tour will not be able to proceed as planned."

In the statement, Minogue said: "I was so looking forward to bringing the Showgirl tour to Australian audiences, and am sorry to have to disappoint my fans. Nevertheless, hopefully all will work out fine and I'll be back with you all again soon."

Minogue had concerts booked in Sydney, Melbourne, Brisbane, Adelaide and Perth over the next month as part of her Showgirl world tour. She also had shows scheduled in Singapore on June 17 and Hong Kong on June 23.

Michael Gudinski, head of Frontier Touring, the company promoting her Australian tour, said it was "way too early to tell" when Minogue might resume her tour and that it was appropriate to postpone the tour indefinitely to "let her find her space and deal with it."

"I'm just hoping and praying because the doctors found it so early that everything will be OK," he told Australia's Seven television network.

"Our thoughts and I'm sure many, many legions of Kylie fans will be with her all the way," he said.

Minogue made her name as a star of the long-running Australian soap opera "Neighbours" before launching her singing career with hits such as "I Should Be So Lucky" and "Better the Devil You Know."

Her popularity soared after her critically acclaimed 2001 album "Fever" which reached No. 1 in charts around the world and No. 3 in the Billboard album chart, and a series of raunchy video clips released with singles such as "Can't Get You Out of My Head."

In late 2003 her song "Slow" became Minogue's seventh No. 1 single in Britain, 15 years and nine months after I Should Be So Lucky" topped the charts there in 1988 for her first No. 1 hit. "Slow" also was nominated for a Grammy.

In the past, Minogue has auctioned one of her bras to raise money for breast cancer research and worked to raise awareness of prostate cancer, after her father was diagnosed with it.

Australian singer Delta Goodrem, who followed in Minogue's footsteps from "Neighbors" to pop stardom, was diagnosed in 2003 with Hodgkins disease, a form of lymphatic cancer.