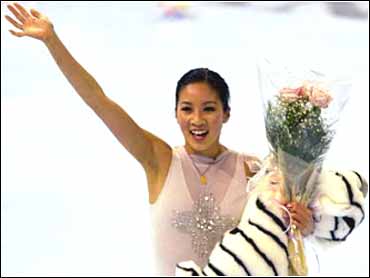 Even the very best need a little innovation now and then.

Michelle Kwan won her fourth straight U.S. Figure Skating Championships title Saturday night with a strong free skate that earned two 6.0s. But she was far from perfect early in the program, cutting down her triple-triple toe loop combination to a double-double.

So the three-time world champion simply threw in a triple toe loop in the final moments.

"It was difficult making a mistake early on and I wanted to put myself back together, because I knew I had so many jumps left to go," said Kwan, 20, who now owns five U.S. crowns - as many as such Olympic gold medalists as Peggy Fleming and Tenley Albright. "I said, `OK, forget about this mistake and just move on.'"

She moved on magnificently, nailing every other element of her program to "Song of the Black Swan," displaying the grace and showmanship for which Kwan has become famous. It wasn't quite the show Kwan staged in the short program Friday night, when she grabbed seven perfect marks for artistry from the nine judges.

Still, it was impressive enough for seven 5.9s and two 6.0s for artistry. As a sign said in the FleetCenter, "Inaugurate Michelle," and the judges did, making her the first woman to win four in a row since Linda Fratianne in 1980.

Her victory also gave coach Frank Carroll a sweep of the singles events; he also works with Tim Goebel, who won his first men's championship. It was the third time since 1995 that a coach swept the titles, with Richard Callaghan doing it in '95 (Nicole Bobek and Todd Eldredge) and '97 (Tara Lipinski and Eldredge). Carroll also coached Fratianne.

Sarah Hughes, considered the staunchest challenger to Kwan thanks to several outstanding performances this season, never mounted that challenge. While Hughes, 15, skated well, she simply isn't at Kwan's level yet.

Actually, no one is when Kwan is on. And for much of these national championships, which were marred by injuries and mediocre performances, Kwan was right on.

Third place went to Angela Nikodinov, who will join Kwan and Hughes in the world championships in March.

Hughes hit six triples, but she was not as polished as Kwan. Her landings did not flow and she wasn't as expressive as the winner.

"I am happy with what I did, because it's never easy to go out at nationals and skate your best program," Hughes said. "But it was better than last year, and next year will be even better."

Nikodinov, portraying "Sleeping Beauty," landed six triple jumps, but none in combination. That might have cost her second place, because her presentation was world-class. She even pretended to be asleep during the slow portion of the music, then woke up into a big spiral.

But Jennifer Kirk, a local favoite, who was fourth, Amber Corwin and Beatrisa Laing all skated well a marked contrast from the rest of these nationals. They showed that U.S. women's skating is in good shape with the Olympics coming up next year.