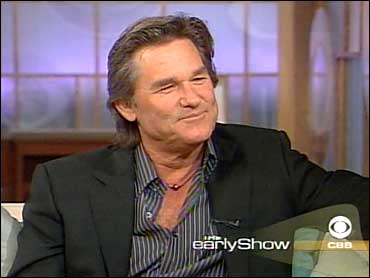 When it comes to disaster epics of the '70s, "The Poseidon Adventure" is widely considered among the best.

Three decades later, an update, simply called "Poseidon" once again has cruise passengers trying to escape a capsized ocean liner. Among them, a father played by Kurt Russell.

"In this one, I think the slimming down of the title applies to the slimming down of the style of the picture," Russell told The Early Show co-anchor Julie Chen on Thursday. "It's a Wolfgang Petersen production, which means it's all about urgency, and there's really not a lot of time spent with characters talking about who they are or what they're going to hopefully do when they're done with this, if they get out alive. This is just the process of trying to get out of this enormous ship."

The film's producers have been reluctant to label it a remake, but Russell said, "I don't care what it's called. It's the same story with all different characters, and an entirely different look."

Russell said he thought "The Poseidon Adventure" was "really good and really well-done. And for the style that it was, I'm very happy that obviously Wolfgang didn't want to take that approach. He wanted to do something quite different."

Russell pointed out that, "Nobody in this picture can really be heroic. Nobody really knows what to do.

"I think what's interesting here is, you do just watch the behavior of people trying to survive. I think that's ultimately what's a little bit different here, because you see some scenes, as they've been described many times now, as very disturbing. I know that one in particular, for me, as an actor, was disturbing. So you get to see these things I think that, in other disaster-type films, you don't focus on that kind of stuff.

"It was just again one of those things where you have this simple story: boat turns over and people try to get out. Of course, the boat is enormous and, I think, it does show you that quite possibly the four or five most critical hours of their lives could be spent with someone whose name they don't even know — and your life could be in their hands. I think that we can relate to that when we watch 'Poseidon.' I think that's part of the reason we sort of hold our breath as we watch it. We don't know if this other person is going to come through for us or not."

Russell said the filming itself was tough. "You're sort of in a constant state of drowning, one form or another," he told Chen. "It was just physically very demanding, of course. But it's the claustrophobia that gets you after a while, and also, we spent, you know, three-and-a-half weeks under water, basically, just shooting all that stuff."

In a side note, Russell observed, "We found out through the production that nobody was ever asked if they could swim. We were very lucky that we could!"

Turning to his longtime real-life significant other, Goldie Hawn, Russell revealed, "Hopefully, we'll get a chance to work together in the fall. She's been putting together this picture called "Ashes to Ashes" for a long, long time. It finally looks like it's coming together, and she asked me if I'd be in the movie. I said, 'Yes.'

"We haven't worked together in 19 years. So, it's been a long time. I hope it comes about. We're looking forward to that."