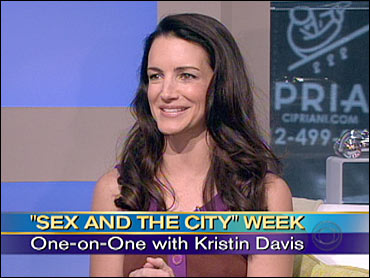 Charlotte, the most traditional of the quartet of gal pals on "Sex And The City," truly believes in marriage. But Kristin Davis, the actress who plays Charlotte, is in no rush to walk down the aisle.

"I'm open to it, certainly, but I think I'm definitely not as goal-oriented about all that as Charlotte is," Davis told Early Show co-anchor Maggie Rodriguez. "I never was, even as a kid. Little girls who say, 'I want to get married' - I was never one of those little girls. It is not that I wouldn't, but I don't see that I must do it or be unhappy. I'm perfectly happy (with) my single self right now."

On the original HBO series, which ran from 1998 to 2004, Charlotte had to overcome many obstacles to get everything she wanted. In the "Sex And The City" movie, which opens Friday, Charlotte has realized her dreams and can spend more time focused on helping her girlfriends.

Photos: "Sex" In Its City

"I think because she's more settled, she's able to be there for her friends when the bad things happen and she's the biggest cheerleader when good things happen," Davis said.

Do her dates expect her to be like Charlotte?

"I don't know. I don't date that much," she said. "Someone asked me that the other day. Can you tell when they're looking at you like they want to get married? I don't even know how to decipher any of that. I feel like people who meet me know pretty quickly that I'm different. You can always tell just in how people talk to you or deal with you where they're coming from."

"I don't know," she said. "I would guess that I'd probably be Charlotte. If not Charlotte, probably Carrie, because Carrie doesn't know where she fits in, if she wants to be part of a couple or stay independent. I relate to that."

It's been four years since the television show's series finale, and although fans of the show may have gone through "Sex And The City" withdrawal, Davis says she hasn't.

"All of us have kept in touch," she said, referring to the cast and crew. "Therefore, I didn't have the total withdrawal. I did have the sadness of not getting to be shooting on the streets. And having that whole energy of being together and having the dialogue and have the fans with us. I miss that part."

"Sex And The City" week continues on the Early Show Friday with Sarah Jessica Parker.