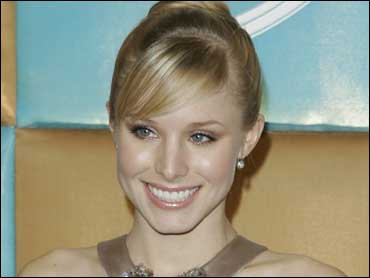 If actress (and die-hard hockey fan) Kristen Bell ever had a chance to hold on to the Stanley Cup for a day, she knows exactly what she'd do with it.

"I would start by eating an entire box of Fruity Pebbles out of it. Then I'd take an afternoon sponge bath in it. Then I'd retro fit it with handles and make it into a Stanley Cup handbag," she joked in an interview with NHL.com.

Bell lives in California, but she hails from Huntington Woods, Mich., a suburb of Detroit. Like many Hockeytown ex-pats she remains faithful to the Detroit Red Wings, who are leading 2-0 in the Stanley Cup Finals.

"They have heart, skill, class and the best color combination known to man," the "Forgetting Sarah Marshall" star tells NHL.com. "That is why they will win."

A self-professed tomboy, Bell learned how to play hockey as a teenager by hanging out with her male friends - all Wings fans, of course.

"I broke both my wrists - at the same time - playing street hockey with them," she said.

The actress is currently filming the Disney movie "When In Rome" in New York and Rome, but when she can she sneaks off to see how her team is doing.

Bell can be heard as the voice of the narrator in the CW's "Gossip Girl" and plays Elle Bishop on NBC's "Heroes."