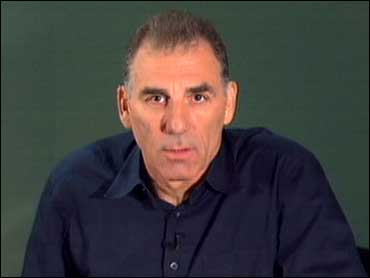 Michael Richards, who played Jerry Seinfeld's eccentric neighbor Kramer on the sitcom "Seinfeld," publicly apologized for racist comments he made in a tirade aimed at some hecklers at a nightclub where he was working as a a stand-up comic.

Appearing on the "Late Show With David Letterman" Monday, the actor spoke live via satellite from Television City, Calif., and fielded questions from Letterman, while in-studio guest Jerry Seinfeld looked on.

"For me to be at a comedy club and flip out and say this crap…" said Richards. "I'm deeply, deeply sorry."

Earlier in the day, as news of Richards' comments hit the web, Seinfeld issued a statement saying he is "sick over this horrible, horrible mistake" and calling Richards' remarks offensive.

A video on TMZ.com shows the actor, 57, repeatedly yelling racial remarks at a man who sat in the audience at the Laugh Factory in West Hollywood. It apparently happened after someone in the crowd said he wasn't funny.

"Fifty years ago we'd have you upside down with a f------ fork up your ass," he says while on stage.

Some chuckling was heard coming from the audience throughout the outburst, along with gasps of "Oh my God!" and other exclamations as Richards veered into unprintable invective.

Eventually someone calls out: "It's not funny. That's why you're a reject, never had no shows, never had no movies. `Seinfeld,' that's it."

Monday night, Letterman asked Richards if he would have responded to the heckler in a similar vein if he had been of a different race.

"It may have happened," said Richards. "I'm a performer. I push the envelope. I work in a very uncontrolled manner on stage. I do a lot of free association — it's spontaneous, I go into character. I don't know. In view of the situation and the act going the way it was going, I don't know. The rage did go all over the place - it went to everybody in the room."

Richards seemed baffled by his own reaction on stage.

"I'm not a racist, that's what's so insane about this," he said.

The actor said that he went back to the club later that night and went on stage to "get back on the horse, as they say." He said he apologized to as many people as he could after the incident, but some of the people he targeted had already left.

He added that he supports the people who complained to the press about his comments.

"They've gone to (the) press, as I think they should," he said. "I think it's important for the African-American community to make sure this kind of crap doesn't come about and I'm sorry that it happened."

"Having apologized, is there much more that you can do?" Letterman asked.

"I just have to do personal work," Richards replied.

At one point in his "Letterman" appearance, Richards grew flustered and expressed second thoughts about appearing on the program when his use of the term "Afro-American" caused some audience members to laugh.

"I'm hearing your audience laugh and I'm not even sure that this is where I should be addressing the situation," he said.

Seinfeld thanked Letterman for giving Richards an opportunity to speak publicly about the incident.

"I've known him many years, and I know how he works on stage," said Seinfeld. "None of that justifies what happened. He's someone that I love and I know how shattered he is about this. And he deserves a chance to apologize, and that's all he wanted, and thank you for letting him come on."

Richards' explanation of making racially offensive remarks, while saying he is not racist, is reminiscent of Mel Gibson's assertion that he wasn't anti-Semitic after he let off a barrage of Jewish slurs during a traffic stop last summer: despite what came out of his mouth, that's not what is inside him.

Industry colleagues were in no hurry to accept Richards' apology.

"Once the word comes out of your mouth and you don't happen to be African-American, then you have a whole lot of explaining," comedian Paul Rodriguez, who was at the Laugh Factory during Richards' performance, told CNN. "Freedom of speech has its limitations and I think Michael Richards found those limitations."

"I've never seen anything like this in my life," Levine said Monday. "I think it's a career ruiner for him... It's going to be a long road back for him, if at all."

Comedian Sinbad was in the audience at the Laugh Factory that night. "(Richards) went crazy," he said on CNN's "Anderson 360," "He kept going and going."