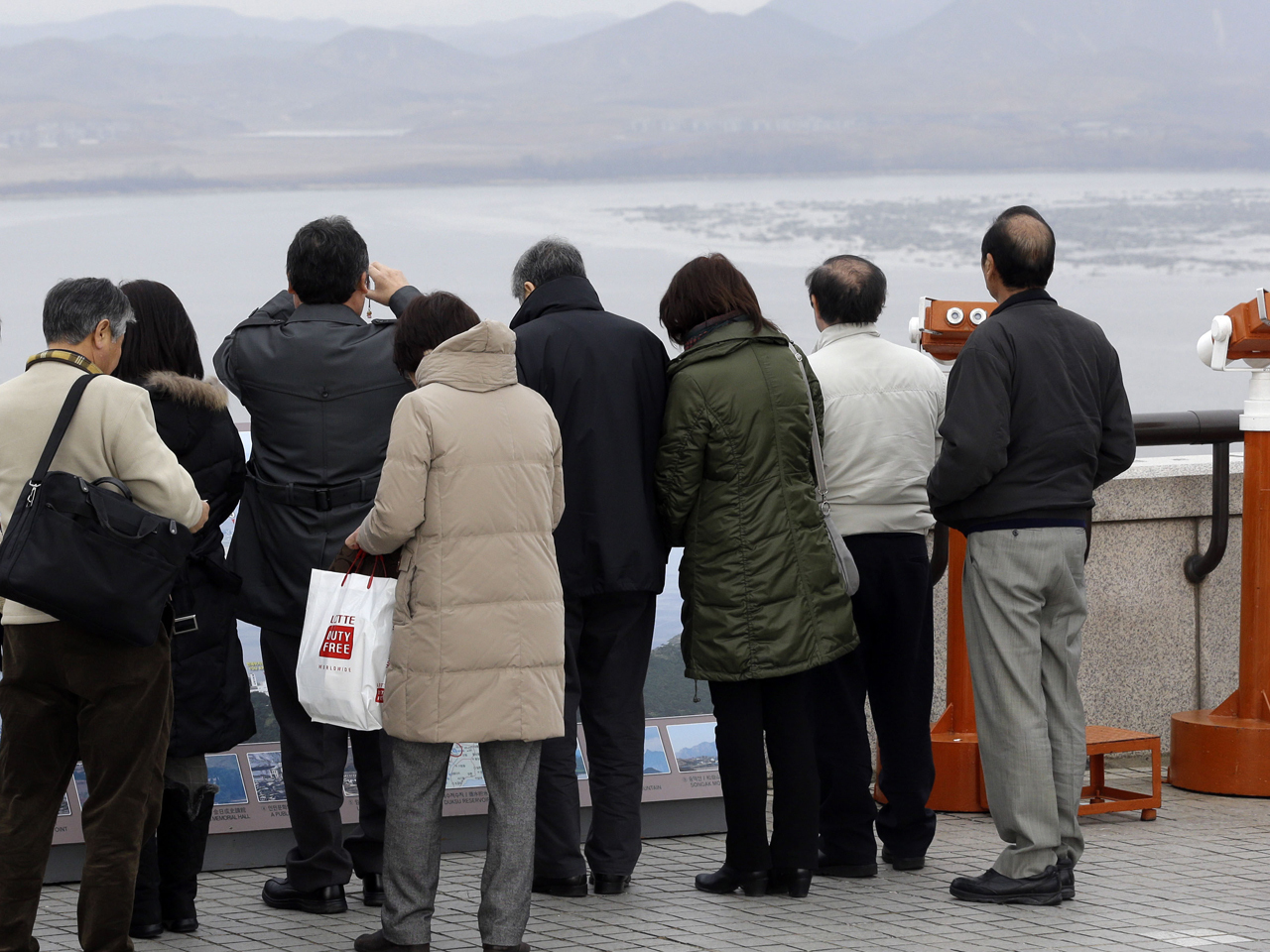 IMJINGAK, South Korea Busloads of tourists still show up to gawk at the world's most heavily fortified border, even as governments on both sides threaten to reduce each other to rubble.

The Koreas' border can seem a surreal place at the best of times; part tourist trap, part war zone. An amusement park, fast-food joints and kitschy souvenir shops mix with an ever-present Cold War tension that is higher now than it has been in years, following North Korean outrage over U.N. sanctions and joint U.S.-South Korean military drills.

Pyongyang has threatened to reduce Seoul to a "sea of fire" and stage pre-emptive nuclear attacks on Washington, while South Korea vows that if it is attacked, it will respond with even greater force. Visitors to the demilitarized zone Thursday viewed the clash with curiosity, fear, excitement; even a dash of romance.

"We were a little bit afraid that maybe they'd throw nukes across the border," Thomas Wolfley, a 32-year-old software engineer from Los Angeles, said, describing his initial feelings when he heard the North's threats. "It makes it more exciting. I'm confident that if anything were to happen the United States would come get me."

The border allows visitors to experience a touch of danger; but not so much that it interferes with their shopping and picture-taking.

Hundreds of thousands of troops from both Koreas operate in fairly close proximity here, each side training lots of big weapons on its opponent's not-too-distant capital.

Seoul is only an hour's drive away, and the dense, chaotic, vibrant sprawl of that megacity can seem like another world as it gives way to farms, scrubby mountains, armed sentries watching for North Korean infiltrators and coiled wire separating the highway from the banks of the Han River.

The 4-kilometer (2.5-mile) -wide DMZ is potentially a violent place, a point that's occasionally obscured by the tourists and DMZ-stamped T-shirts and hats.

Shooting still breaks out occasionally. A monument in the DMZ stands as a memorial to two American officers hacked to death with axes in 1976 by North Koreans during a fight that began as a dispute over U.S. efforts to trim a tree.

Tourists line up for the chance to walk deep below ground into North Korean infiltration tunnels, many of them surprisingly well made, that have been discovered over the years.

The high point of many tourists' DMZ visits is a small group of huts in Panmunjom, which straddles the border and is the place where troops from North and South come closest.

South Korea sends some of its tallest, toughest soldiers to Panmunjom. They stand statue-still, in fierce martial arts poses, chests stuck out, fists clenched, helmets and sunglasses reflecting the sun as they stare north. North Korean soldiers, smaller than their southern counterparts, glare through binoculars and gesture toward the south.

An attack at Panmunjom is unlikely, but a sudden North Korean strike in disputed waters in the Yellow Sea is certainly a possibility. Violence blamed on Pyongyang in 2010 killed 50 South Koreans.

Among other declarations, North Korea has said it will no longer recognize the armistice that ended the 1953 Korean War, though it has made such remarks before. The U.N. says the armistice cannot be abandoned unilaterally. The most obvious product of that agreement- the DMZ - seems unchanged.

Experts dismiss the North's threat to launch nuclear missiles against the United States, saying Pyongyang is years from developing the technology needed to pull that off. A direct attack on Seoul is also unlikely, as it would put the future of the ruling Kim dynasty at risk.

Recent threats are seen more as a way to rally support among North Korea's elite and military for leader Kim Jong Un and to scare Seoul and Washington into agreeing to talks that would eventually provide North Korea with aid and security guarantees.

Some South Koreans worry about rising hostility, but many more ignore or shrug off North Korean threats they've lived with for decades. And at the DMZ, some even find beauty in the broad strip of no-man's-land between the countries.

Baek Jong-moon and his wife, You Ga-yong, celebrated their fifth wedding anniversary by driving up Saturday to take a look from an observation point at North Korea and the wild, mostly unspoiled, late winter scenery.

"It's so peaceful here," Baek said. "I see no point worrying."