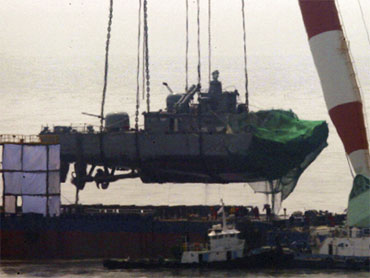 The U.N. Security Council said late Monday it is "gravely concerned" that the sinking of a South Korean ship could endanger peace on the Korean peninsula and urged Seoul and Pyongyang to refrain from any provocative acts.

After listening to separate presentations from South Korea and North Korea on the March 26 incident that claimed the lives of 46 South Korean sailors, the council issued a statement addressing the rising tensions but did not say what action it might take in response.

South Korea accused North Korea at the council meeting of torpedoing the ship, but the North denied responsibility and called itself "a victim."

The Security Council said in the statement it "is gravely concerned with this incident ... and its impact on peace and stability on the Korea peninsula."

"The Security Council makes a strong call to the parties to refrain from any act that could escalate tensions in the region and makes an appeal to preserve peace and stability in the Korean peninsula," the statement said.

South Korea sent a letter on June 4 asking the council to respond to the sinking of the 1,200-ton Cheonan "in a manner appropriate to the gravity of North Korea's military provocation."

The council said it will continue its consultations on the incident.

U.N. diplomats familiar with contacts on possible council action said China, the North's closest ally, is opposed to a third round of sanctions against Pyongyang and indicated the more likely result will be a presidential statement. The diplomats spoke on condition of anonymity because the contacts have been private.

At Monday's informal council meeting, Yoon Duk-yong, co-chair of South Korea's international civilian-military investigation team, said he made a 23-minute presentation to the council and showed a seven-minute video on the team's findings.

Members of the team - including South Korean military and intelligence officials and experts from the U.S., Australia, Britain, Sweden and Canada - then answered questions for 1 1/2 hours, he said.

Yoon said the team presented and explained the evidence that the Cheonan was sunk by a torpedo launched "by a North Korean midget submarine."

"We identified the torpedo as North Korean CHT02D on the basis of our recovered piece of that torpedo, which was the propulsion part including two propellers, a shaft, steering plates and a motor," he said.

Yoon, a professor at the Korean Advanced Institute of Science and Technology, said the ambassadors asked "very good questions" and the atmosphere was "very positive."

Before heading into his closed-door meeting with the council, North Korea's deputy U.N. ambassador Pak Tok Hun told reporters he strongly disagreed with the findings of the South Korean investigation.

"We had nothing to do with that" sinking, Pak said. "We know. We are just a victim. So we'd like to make our position clear here."

After the meetings, Japan's U.N. Ambassador Yukio Takasu said he and other council ambassadors asked the South Korean team many questions about other possibilities for the sinking of the Cheonan. He said "many of us" came away believing the only explanation was a deliberate North Korean torpedo attack.

Takasu pointed to several pieces of evidence: there was no internal problem with the Cheonan; a residue of "white aluminum" found in the torpedo fragments and in many parts of the ship "have been scientifically established (to be) identical;" and no other submarines were in the area but two North Korean subs were unaccounted for.

"Basically, they claimed that it is not South Korea but North Korea which is victim, so therefore they should be given opportunity to visit the site of the sinking," he said.

Many ambassadors asked why North Korea considered itself the victim and why they wanted to visit the site when it had been thoroughly searched, Takasu said, but they didn't get any explanation.

Japan and several other countries felt "we have strong enough evidence for the council to take strong action" but others are "still analyzing" it and want other questions answered, he said.

Because the situation on the Korean peninsula is "very tense," Takasu said, "the council should be very prudent" in its reaction.

"I think the council should react in a responsible manner, but at the same time try to avoid any act which may provoke ... this irresponsible act that we want to avoid," he said.