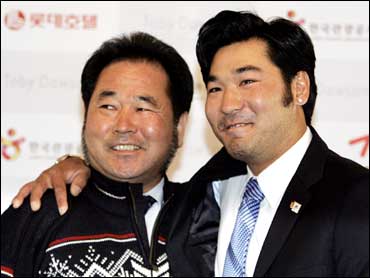 It was the happy ending: U.S. Olympic skier Toby Dawson meeting the father he lost more than two decades ago.

Hugging his son at a hotel, Kim Jae-su teared up.

"I am glad to meet my son and see that he has grown up so wonderfully," Kim said. "I am thankful that he has come to look for me even after such a long time."

It started when baby Toby, age 3 and then named "Bong-seok" got lost at a market in Busan, a southern port city in South Korea, reports CBS News correspondent Barry Petersen. Authorities thought he was abandoned, so he was adopted by a family in Colorado.

A truck driver at the time, Kim said it was too late when he got home to start searching for his missing child, whose original Korean name was Bong-seok. Over the next few days, he said he scoured local orphanages but was unable to find his son.

"I went to many orphanage houses only to hear that they didn't have anyone like him. They wouldn't let me come inside and look for him," the 53-year-old Kim said, adding he would search orphanages whenever he had time but eventually gave up.

Jump ahead to Dawson winning Olympic bronze for freestyle skiing in Turin last year. South Korea made him theirs, splashing his story across the papers, reports Petersen. The publicity started the hunt for his father.

(AP)
Dozens hoped he was their son. DNA tests confirmed it was Kim, although the shared sideburns were a pretty good clue, as well. (See the picture on the left.) His father reached over several times during the news conference to touch Dawson's face while they also held hands.

"I'm not here to beat him up for what happened," Dawson said, adding that he had a fortunate life growing up with his adoptive parents, who were ski instructors in Vail, Colo.

But the reunion answered so many feelings of a Korean raised in America.

"I felt like I did not fit in anywhere. I looked at my parents and I didn't look like them and I also felt if I went to Korea, I didn't belong there, so I felt like I was still lost, stuck between two different worlds," Dawson said.

Dawson said he plans to use a new foundation he is starting in his name to help work to avoid cases like his in the future.

"Being caught in limbo between two different countries and not looking like your family is going to be tough," he said. "We need to try to keep our children and work a little bit harder to keep these circumstances from happening."

Dawson said he hoped to eventually stage a reunion with all his parents. He also mentioned again his desire to become a professional golfer within five years, after retiring in September from professional skiing.

Also at the reunion was Dawson's younger brother, 24-year-old Kim Hyun-cheol, who was wearing an earring in his left ear similar to those Dawson has in both ears. All three men wrapped their arms around each other before heading to a family lunch.