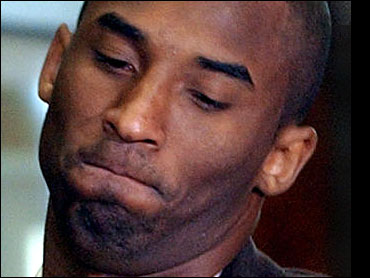 Kobe Bryant lost his sponsorship deal with McDonald's, costing the NBA star another endorsement while his sexual assault case proceeds in Colorado.

The fast-food company said Monday its three-year agreement with the Los Angeles Lakers guard expired Dec. 31 and was not renewed.

"It would be inappropriate to comment or speculate at this time about any future sponsorship relationship," spokesman Bill Whitman said.

Bryant's once-wholesome image has been damaged since a 19-year-old woman accused him last year of sexual assault. Bryant admitted committing adultery but contends the sex was consensual.

His defense attorneys argued last week that his accuser's sexual past and mental health history should be allowed as evidence to prove she had a "scheme" to falsely accuse the NBA star.

Attorneys Hal Haddon and Pamela Mackey said denying them the right to bring up such evidence would violate Bryant's constitutional right to a fair trial.

Echoing accusations they raised during Bryant's preliminary hearing last year, the attorneys suggested the 19-year-old woman was injured during sex with "multiple" men in the three days before her encounter with the Los Angeles Lakers star at a Colorado resort.

They also said the woman's medical history, including treatment for mental illness, is relevant because it could help explain "her motive, scheme, plan and modus operandi for falsely accusing Mr. Bryant of sexual assault."

The five-time All-Star who helped the Lakers win three NBA championships recently hurt his shoulder and could miss several weeks.

Bryant is due back in an Eagle courtroom on Jan. 23, when state District Judge Terry Ruckriegle is expected to hear arguments on whether the woman's medical records can be used as evidence. The defense says she waived her right to medical privacy, a claim the prosecution denies.