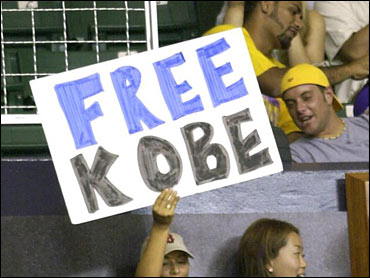 In this commentary, CBSNews.com Legal Analyst Andrew Cohen offers his opinion on what is behind the maneuvers of both the defense and the prosecution in the Kobe Bryant sexual assault case. Note: some of the testimony from a sheriff's detective contained graphic detail of the alleged assault.

Kobe Bryant's sexual assault case roared out of first gear Thursday. Using a "probable cause" hearing as a prism through which to offer their respective spin on events, prosecutors and defense attorneys gave notice that a Bryant trial will look more like a street brawl than a church picnic. It was an ugly afternoon in court and things promise to get even uglier as the case gets closer to trial.

Even though the preliminary hearing isn't over, even though it resumes next Wednesday, its result is preordained. Eagle County Court Judge Frederick Gannett will certainly find that probable cause exists to bind Bryant over for trial sometime next year.

But the hearing was never about tangible results, it was always about perceptions - and which side would be able to create perceptions that would last in the minds of those twelve poor souls who one day will have to sit in judgment in this case.

Prosecutors want you (and, more importantly, potential trial jurors) to believe that Kobe Bryant didn't take no for an answer on June 30th after he and his 19-year-old accuser started making out in his hotel room at a Colorado resort. They portray him as a relentless, remorseless rapist, who was worried about getting ratted out even as he assaulted his victim.

You might say - and before this trial is over I bet someone will say - that prosecutors want you to believe that Bryant was and is a spoiled, rich, young man who hasn't yet learned how to deal with not getting what he wants.

The District Attorney's spin concedes that the woman initially was excited to hang out with Bryant - he's a superstar, after all - and that she flirted with and then briefly responded to his advances.

That's not a rape case, however, that's just a first date; and if that is where their story ended none of the rest of us would be here enjoying all of the wonderful food and weather that the Vail Valley has to offer. The story doesn't end there, however, it ends with Bryant and the young woman having sex - either consensually or not, which is the first and last question this case will answer.

According to his accuser, and as recounted to the world by a young Eagle County sheriff's detective, Bryant blocked the woman from leaving the room after she refused to go past first base with him. He then grabbed her by the neck, forced her to bend over a chair, pulled up her dress and pulled down her panties, and then raped her for about five minutes.

She says she cried the whole time and that he kept asking her to "not tell anyone" about what they were doing. She later told her nurses that Bryant also forced her, after the sex, to kiss his penis. In this side of the story - still untested by much cross-examination or the alleged victim's own testimony, Kobe Bryant is not a pitchman or a clutch NBA player - he's a merciless thug.

But there is another side to the story and that story is coming out a bit, too. For example, we learned Thursday that the alleged victim went back to work at the resort after the incident and that she did not immediately announce to the world that she had been raped by a famous basketball player.

We also learned that she did not suffer any apparent bruises to her neck or throat, bruises that might have been consistent with the way she says Bryant held her during the alleged assault. All of these facts, if they are borne out at trial, will permit the defense to argue to jurors that the alleged victim acted in a manner inconsistent with that of a sex assault victim.

Perhaps more importantly, we learned that there will be a great battle at trial over the significance of the alleged victim's vaginal injuries, which prosecutors say were consistent with "non-consensual sex" and which the defense suggests, shockingly, may have been caused by the alleged victim's other lovers.

It was this late-afternoon suggestion by defense attorney Pamela Mackey - who asked aloud whether the alleged victim's "vaginal injuries were consistent with someone who had sex with three different men in three days" - that stopped the hearing cold. After she asked the question, the three prosecutors rose in unison and shouted "OBJECTION," just like you see it in the movies or on television.

Clearly, Mackey wants the world, and Bryant's accuser in particular, to know that the case may be heading in this grim direction. How can this be so in an age of rape shield statutes? Because defense attorneys sometimes are permitted to introduce evidence that shows that an alleged victim's injuries were caused by someone other than the defendant.

The implication is that if Bryant's accuser had sex with two other men around the time that she had sex with Bryant, perhaps one of those men was the one who caused her injuries and, if that is the case, then there is even less physical evidence linking Bryant to a crime.

In the defense view, there is too little physical evidence to warrant a rape conviction and too many unanswered questions about the alleged victim's conduct to make her credible. In the defense view, it's Bryant's accuser who is the heinous one, the one capable of making a false charge like this against a good man with a family.

If Judge Gannett doesn't start cracking down a bit - he'll have one more chance next week - he is going to be compared with another friendly, witty judge in another famous case involving a California sports figure. And no judge in his right mind wants to live with that comparison.

The remarkable events of the day explain why we saw a preliminary hearing in the first place. I was among the gaggle of legal beagles who was sure the defense would waive the hearing and skip ahead to the arraignment. I still think that might have been the best option for Bryant's attorneys. After all, legally and editorially, the brief defense case so far pales in impact to the story prosecutors are opening with.

But at least now I can understand why the Bryant lawyers decided to go ahead and allow prosecutors to begin to present their case so long before trial. The defense wants to present itself as confident and aggressive, not unlike the way its young client plays the game of basketball. "Bring it on," Bryant's attorneys figuratively told the world Thursday. And now the world ought to know that the Bryant case is going to be as wild as the man himself is reserved.