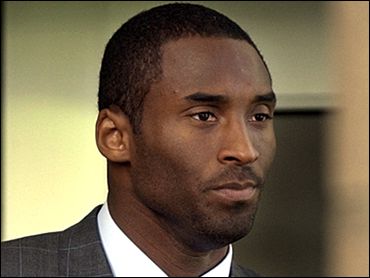 The night after being accused of rape, NBA star Kobe Bryant told sheriff's investigators that the sex with his accuser was consensual — and admitted to similar encounters with another woman who he said could testify about his sexual tendencies.

Bryant, in the July 2003 conversation made public Thursday, also wondered aloud if he could "settle" the matter to save his reputation, career and marriage.

A transcript of the interview made headlines in the Vail Daily, which said a printout and an audio recording were mailed anonymously to the newspaper from Denver.

The 75-minute interview was taped by Eagle County sheriff's investigator Dan Loya, who questioned Bryant along with colleague Doug Winters. The talk took place in the parking lot of the Lodge & Spa at Cordillera and in Bryant's room.

At the time, his 19-year-old accuser had already had a hospital examination and had been interviewed by Winters. The felony sexual assault charge that could have landed Bryant in prison for life was dismissed at her request earlier this month because she no longer wanted to testify. Her civil lawsuit against Bryant is pending in federal court.

During the interview, Bryant initially denied having sex with the woman, then changed his account, saying she initiated it after the investigators told him they had physical evidence indicating the two had sex.

"It was totally consensual," he said.

"What makes you believe it was consensual?" Loya asked.

"`Cause she started kissing me, (inaudible) then she bent over and (inaudible)," Bryant said.

Bryant said the woman offered to show him a tattoo of musical instruments and notes on her back, and she lowered a strap on her dress so he could see it. After that, he said, she kissed him and he kissed back. They caressed each other and she performed oral sex.

Bryant said he held her by the neck from behind, she lifted her dress and bent over a chair, and they had sex. He said he stopped after she refused to let him do something he requested.

During a hearing last fall, Winters said Bryant grabbed the woman by the neck hard enough to leave a small bruise on her jaw, bent her over a chair and pulled down her underwear.

"It was consensual, there was nothing weird, you know what I mean," Bryant said during the interview.

"Did she say anything to (you) to provoke any of this to happen?" Winters asked.

"She said she wanted to, you know, she hoped that I would (edited) her," Bryant said.

When Loya told Bryant the woman had experienced some bleeding, he said he was surprised because he hadn't noticed any blood. The shirt he was wearing, which he gave to the investigators, was later found to be stained with the woman's blood.

Asked what happened while she was leaving Bryant's room, he told investigators she never cried. She put on her clothes, asked for his autograph and gave him a kiss, he said.

Winters has said the woman cried during the act and said "no" at least twice. He also said Bryant told her to go into his bathroom to clean herself up before she left, and that bellman Bobby Pietrack told investigators she seemed upset and her clothes and hair were disheveled when she left work that night.

Bryant also admitted to frequent similar encounters with another woman named "Michelle," who could testify that he also held her from behind. Bryant, who had been married for two years and had a 5-month-old daughter, said his wife did not know about the other woman.

He told the investigators he was concerned about damage to his marriage, his career and his image if word of the rape allegation got out.

"Is there any way I can settle this, whatever it is?" Bryant asked.

"Well, what do you mean by settle?" Winters replied.

"If my wife, if my wife found out that anybody made any type of allegations against me she would be infuriated," Bryant said.

The newspaper said it edited the transcript to remove profanity and graphic sexual descriptions; a full copy was not immediately made available to The Associated Press. The transcript appears to be accurate, a source close to the prosecution told AP.

John Clune, an attorney for the accuser, declined comment on the transcript but criticized the leak, which follows several mistakes by courthouse staff that publicly revealed the woman's name.

"The continued evidence of the lack of integrity of the criminal case reaffirms our client's decision to not proceed in that court," Clune said.

Defense attorney Pamela Mackey did not return a call. At Mackey's request, a judge has issued a temporary restraining order prohibiting any public release of records or evidence from the case.

In a motion filed Thursday, defense attorneys said the dissemination of Bryant's statements violated the restraining order and asked the court to find and punish whomever leaked them to the media.

The defense also asked that the leaked materials be seized from news organizations. Christopher Beall, an attorney for the Vail Daily and various news organizations, including AP, immediately filed a motion advising the court that such a seizure would violate the First Amendment.