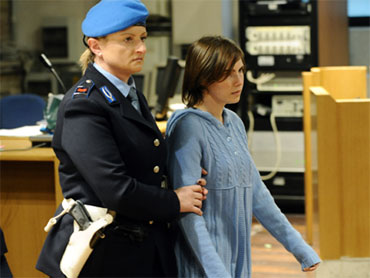 The parents of Amanda Knox are hopeful that the appeals process and the independent review of forensic evidence used to convict their daughter and her boyfriend of murder will clear her of complicity in the death of Meredith Kercher.

Speaking on "The Early Show on Saturday Morning," Knox's mother, Edda Mellas, described the family's ordeal as "an ongoing nightmare."

"It doesn't get any easier," she said. "We just keep doing what we need to do because we know Amanda's innocent, and we're going to keep working to get her out of there."

Knox is serving a 26-year sentence; her boyfriend, Raffaele Sollecito, was sentenced to 25 years. Both have denied wrongdoing and are appealing the verdict of the Italian court.

"One of the very key things that's associated to this appeal is the opportunity to have an independent review of the forensic evidence," he said. "And with the horrific situation that took place inside Meredith's bedroom, the fact that there is absolutely no trace of Amanda inside that room, I think, will really be brought to the forefront during that independent review."

"I think from a forensics standpoint, really what [the judge's] responsibility is, is to get to the truth, and I think the truth really will come though an independent review, and that's where this particular judge will really make a decision next weekend about that. So we're very hopeful that that will take place."

Knox said that the prosecution engaged in "character assassination" of Amanda, calling her "dangerous" and "diabolical."

He said they needed to create that image of her "in order to try to present the case that they had, which was really nothing," he told anchor Chris Wragge. "What we've been doing over the years is trying to really portray her [as] who she really is. And she spoke about that in court today and I think she did very well."

Amanda's attorneys are also expected to present new evidence, including witnesses who will testify that Amanda wasn't at the scene on the night of Kercher's murder.

The prosecution, meanwhile, is coming to the appeal with the goal of seeking to increase Amanda's sentence to life in prison.

"I just don't understand, you know, the whole purpose behind that," Mellas said. "So, yes, it's disturbing, but it's not something we really focus on because we know she's innocent. You know, we were going through with whatever we needed to do and whatever appeals we need to do to get her out of there."

Curt Knox is optimistic: "I'm hopeful that, with the independent review of the forensic evidence, you know, that could take anywhere from one to three months, but I'm hopeful that, in early spring we'll get a positive result and that she'll be able to get to come home."