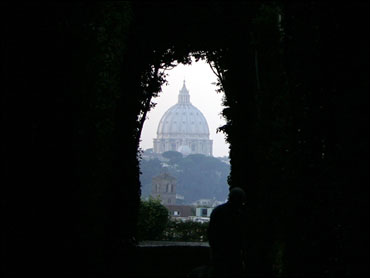 The Vatican has published secret documents about the trial of the Knights Templar, including a long-neglected parchment showing that Pope Clement V initially absolved the medieval order of heresy, officials say.

The 300-page volume entitled "Processus Contra Templarios" (Latin for "Trial against the Templars") recently came out in a limited edition - 799 copies - each priced at $8,377, said Scrinium publishing house, which prints documents from the Vatican's secret archives.

The Vatican will hold a news conference about the publication on Oct. 25.

The order of knights, which ultimately disappeared because of the heresy scandal, recently captivated the imagination of readers of the best-seller "The Da Vinci Code," which linked the Templars to the story of the Holy Grail.

The Vatican work reproduces the entire documentation of the papal hearings convened after King Philip IV of France arrested and tortured Templar leaders in 1307 on charges of heresy and immorality.

The military order of the Poor Knights of Christ and of the Temple of Solomon was founded in 1118 in Jerusalem to protect pilgrims in the Holy Land after the First Crusade.

As their military might increased, the Templars also grew in wealth, acquiring property throughout Europe and running a primitive banking system. After they left the Middle East with the collapse of the Crusader kingdoms, their power and secretive ways aroused the fear of European rulers and sparked accusations of corruption and blasphemy.

Historians believe Philip owed debts to the Templars and used the accusations to arrest their leaders and extract, under torture, confessions of heresy as a way to seize the order's riches.

The publishing house said the new book includes the "Parchment of Chinon," a 1308 decision by Clement to save the Templars and their order.

The Vatican archives researcher who found the parchment said that it probably had been ignored because the 1628 catalog entry on the meter (40-inch)-wide parchment was "too Spartan, too vague."

"Unfortunately, there was an archiving error, an error in how the document was described," the researcher, Barbara Frale, said in a telephone interview from her home in Viterbo, north of Italy.

"More than an error, it was a little sketchy," she said.

The parchment, in remarkably good condition considering its 700 years, apparently had last been consulted at the start of the 20th century, Frale said, surmising that its significance must have not have been realized then.

Frale said she was intrigued by the 1628 entry because, while it apparently referred to some minor matter, it noted that three top cardinals, including the right-hand man of Clement, Berenger Fredol, had made a long journey to interrogate someone.

"Going on with my research, it turned out that in reality it was an inquest of very great importance" on behalf of the pope, Frale said. Fredol "had gone to question the Great Master and other heads of the Templars who had been segregated, practically kidnapped, by the king of France and shut up in secret in his castle in Chinon on the Loire."

According to the Vatican archives Web site, the parchment shows that Clement initially absolved the Templar leaders of heresy, though he did find them guilty of immorality, and that he planned to reform the order.

However, pressured by Philip, Clement later reversed his decision and suppressed the order in 1312.

Jacques de Molay, Grand Master of the Templars, was burned at the stake in 1314 along with his aides.

Surviving monks fled. Some were absorbed by other orders; over the centuries, various groups have claimed to have descended from the Templars.