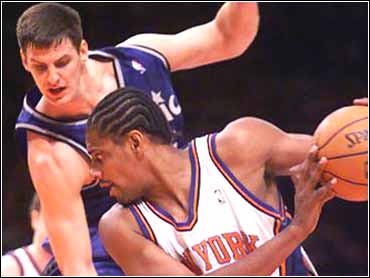 Thanks to the defensive job Marcus Camby did on Tracy McGrady, the Knicks won their sixth straight game and held their opponent under 100 points for the 27th consecutive time.

Camby took over the defensive assignment on McGrady in the third quarter and held it for the rest of the night, containing a player that no one else could stop as the Knicks beat Orlando 95-92 in overtime Thursday night.

"I used to play him one-on-one all the time, he was my little young boy," said Camby, who was teammates with McGrady on the Toronto Raptors during McGrady's first NBA season in 1997-98. "He wasn't the player that he is now. Now he's like a superstar."

Camby had 22 points and 12 rebounds, but his biggest contribution came on defense. Often forced to begin guarding McGrady on the perimeter, Camby forced Orlando's leading scorer to miss three shots and commit a turnover on four of the Magic's final five possessions in overtime.

McGrady finished with 36 points, 20 of which came in the first half before Camby was switched onto him defensively. McGrady scored the Magic's first six points of overtime but was shut out the rest of the way as the Knicks extended their longest winning streak of the season.

"I thought Marcus did a great job on him," Knicks coach Jeff Van Gundy said. "He also did a good job on him last year in the Toronto (playoff) series, so really there was nothing to lose."

Allan Houston led New York with 24 points and seven assists, and Latrell Sprewell had 20. The Knicks won despite allowing the Magic to score the first 15 points of the game.

Darrell Armstrong scored 15 for the Magic, ho dropped to 0-5 this season when playing on national television.

Sprewell missed a drive with a minute left in overtime, but hustled to keep the ball alive. The Knicks retained possession and Camby hit two foul shots with 51 seconds left for a 94-92 lead.

The Magic got the ball to McGrady, as they had been doing on every possession throughout overtime, isolated on the left side against Camby. As McGrady drove, Camby went down and a charging foul was called.

The Knicks couldn't get off a good shot and committed a 24-second violation with 10.5 seconds left, but McGrady missed a runner with 3.2 seconds left as he was forced to shoot over the outstretched arm of the 7-foot Camby.

Larry Johnson made one of two free throws for a three-point lead, and Armstrong missed a wild 3-pointer at the buzzer after Orlando inbounded with just 0.8 seconds left.

"I'm not going to get down on myself because I failed in this game," McGrady said. "There's going to be some times when I fail."

After being kept quiet for most of the fourth quarter, McGrady hit a jumper over to give Orlando an 86-82 lead with 1:54 left.

Camby scored on a dunk on New York's next possession, then harassed McGrady into taking a bad shot. After being fouled by Bo Outlaw with one second left on the shot clock, Camby made both free throws to tie the game at 86-86 with 47 seconds left.

McGrady got the ball isolated against Camby on Orlando's next possession, but he passed it away for a 3-point attempt by Darrell Armstrong that missed with 25 seconds left.

That allowed the Knicks to run down most of the rest of the clock, and McGrady blocked Allan Houston's 14-footer with 2.2 seconds left to give the Magic the final shot of regulation a 40-footer by Mike Miller that bounded off the back rim.

The Magic took a 15-0 lead as the Knicks missed their first 10 shots, prompting Van Gundy to replace four-fifths of his lineup and send in reserves Luc Longley, Erick Strickland, Rick Brunson and Kurt Thomas. The Knicks quickly broke out of their offensive funk by scoring on their next two possessions, but they finished the quarter 3-for-21 from the field and trailed by 15.

"It was an embarassing moment getting subbed like that down 15-0," Camby said.

The second quarter was an entirely different story as Van Gundy went back to his normal lineup and Houston scored 15 points in the period to help the Knicks erase their deficit.

Houston fed Thomas with a nifty lookaway pass on the fast break for a reverse layup that gave New York a 70-67 lead entering the fourth, but Michael Doleac hit two jumpers as part of a 10-0 run early in the fourth that gave the Magic an 81-74 lead.