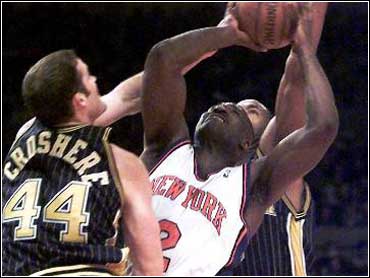 Reggie Miller's only outburst was a two-word obscenity directed at the fans.

Miller lost his cool Saturday as the New York Knicks were dominating the Indiana Pacers in an 87-73 victory. The profanity came late in the third quarter after a series of physical plays and flops prompted the crowd to direct a derisive chant at their one of their least-favorite villains.

At the time, it seemed like a prelude to another chapter in Miller's series of clutch performances at Madison Square Garden. But instead ...

Instead, Miller found himself sitting on the bench for the entire fourth quarter as the Pacers never mounted a comeback and matched their most-lopsided loss of the season.

"As hard as it is for me to give the Knicks credit, they played very well at the defensive end," Miller said. "We had no rhythm whatsoever. We didn't do the things that got us to this point."

Allan Houston made nine of 10 shots in one stretch, scored 13 points in the third quarter and finished with a team-high 19 as New York moved into a tie with Miami for first place in the Atlantic Division for the first time since Jan. 30.

In as dominant a victory as the Knicks have had this season against a quality opponent, Latrell Sprewell added 17 points, Patrick Ewing had 16 and Larry Johnson and John Wallace scored 12 apiece.

Miller finished with 16 points to lead the Pacers, who had their four-game winning streak snapped in their lowest-scoring game of the season.

"With the wy we were playing team defense he probably got frustrated," said Chris Childs, who was Miller's main antagonist this time. "Calls went against him that he usually gets, but I don't think anything gets under Reggie's skin with as long as he's been playing this game."

It was New York's first game since losing point guard Charlie Ward for 3-4 weeks with a broken finger. Coach Jeff Van Gundy started a big backcourt of Houston and Sprewell for the first time since Dec. 25 the day the Knicks lost at Indiana and kept Childs in a backup role.

Childs played well, tying his season-high with nine assists and contributing to Miller's outburst by matching him flop for flop.

It was during Childs' and Miller's third-quarter flopfest that the crowd started getting on Miller. A pair of quick fouls on Miller while battling for position with Childs along with a rare missed free throw by Miller spurred the crowd to start an obscene chant.

Miller then turned to the crowd and mouthed an obscenity.

"I wasn't flopping. I got hit in the jaw," Childs said. "It's a call he normally gets, so he had a taste of his own medicine."

"You have the refs in your hip pocket like that and I'd keep doing it too," Miller said.

"Me? You guys know I don't have the referees in any of my pockets," said Childs, who has long complained that the officials treat him unfairly.

The Knicks took the lead for good on a 19-footer by Houston with 3:05 left in the first quarter, and their advantage quickly grew to double digits as a driving layup by Wallace 3 1/2 minutes into the second quarter made it 33-22.

Jalen Rose scored six straight points to cut Indiana's deficit to three, 42-39, but the advantage was back to seven by halftime and the Pacers only fell further behind the rest of the way.

Houston hit three straight jumpers midway through the third to make it 57-43, and Wallace's basket late in the third put New York ahead by 18. That was when Miller started going at it with the crowd, and this time unlike so many Pacers-Knicks games in the past he had no fourth-quarter heroics up his sleeve.