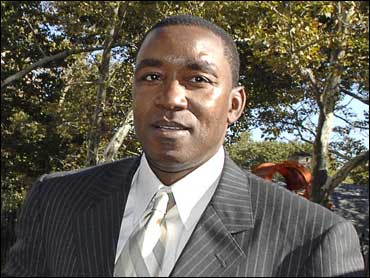 New York Knicks coach Isiah Thomas testified Wednesday that he never cursed at a fired team executive who has accused him of sexual harassment.

In his second day on the witness stand at a trial in federal court in Manhattan, Thomas denied allegations in a $10 million lawsuit that he repeatedly addressed the plaintiff, Anucha Browne Sanders, as "bitch" and "ho" while they worked together at Madison Square Garden.

Degrading a woman that way "is never OK," he told the jury of five women and three men. "It is never appropriate."

He also calmly downplayed a videotaped deposition in which he suggested he would be more troubled hearing a white man calling a black woman a "bitch" than if a black man said the same thing.

"It's very offensive for any man - black, white, purple," he said under questioning by one of his lawyers.

Thomas, 46, also contradicted earlier testimony by Browne Sanders that during a conversation about season ticket holders, he snapped: "Bitch, I don't give a (expletive) about these white people."

Season ticket holders "are the backbone of how we all make a living," he said.

In Browne Sanders' suit, the 44-year-old former Northwestern basketball star says she was dismissed because she dared to accuse Thomas of routinely using vulgar language in his first year and of later making unwanted sexual advances toward her. She seeks reinstatement to a job as vice president of marketing, which paid as much as $260,000 annually.

Thomas testified that in the two years he worked with Browne Sanders, their contact was infrequent, and usually friendly and respectful. Sometimes they would greet each other with hugs and kisses on the cheek, but there nothing romantic about it, he said.

"Anucha came in and gave me a big hug and a big kiss and said she wanted to welcome me," Thomas said, describing how Sanders introduced herself after he joined the team on Dec. 22, 2003, reports the New York Post.

"She was a co-worker, and that's the way I treated her," he said.

Asked about an exchange with Browne Sanders following a Knicks game in 2005, Thomas smiled and asked, "Is that the 'No love' hug?"

Thomas said he "went to give her a kiss on the cheek and she recoiled is such a way that it made me feel uncomfortable, and I said, 'What? No love today?"'

He claimed he was surprised to learn later that Browne Sanders was pursuing a sexual harassment claim.

Asked when he first received sexual-harassment training, Thomas said it was at age 10, according to the Post.