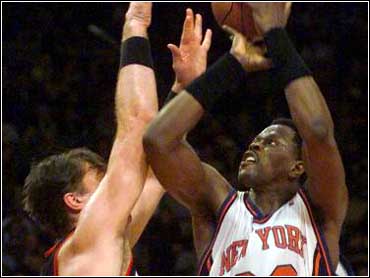 Patrick Ewing showed his critics that his career in New York is not quite done yet.

Ewing, the subject of criticism and trade rumors this week, energized the Knicks by matching his season-high with 20 points as New York cooled off the streaking Portland Trail Blazers 98-88 Thursday night.

"He's a warrior," teammate Larry Johnson said. "Patrick's been around a long time. It was just a matter of time until he heated up. His shot was falling and he got into a good groove tonight."

Ewing, 37, has battled injuries the past three years and missed the first 20 games this season with tendinitis in his Achilles. He missed New York's trip to the NBA Finals last year and came back to find his role diminished as Allan Houston and Latrell Sprewell took over.

Ewing's ego hasn't diminished, however, and his relationship with coach Jeff Van Gundy has deteriorated this season as his minutes have decreased.

"I'm not going to complain about minutes," Ewing said. "When my number is called, I do the best I can. I knew I'd be a significant contributor. I don't need other people to motivate me. I motivate myself."

This hasn't been the best week for Ewing. Benched for the final 17 minutes in Tuesday night's loss to Orlando, he woke up Wednesday to a story in the newspaper that said the Knicks discussed a trade with the Wizards that would have sent him to Washington.

"Whatever happens, happens," Ewing said of his future in New York. "Greater players than me have been traded. It's a business."

If he plays like he did Thursday, the Knicks surely won't trade him. He helped New York take control in the third quarter with seven points, four rebounds and two blocks.

After Bonzi Wells nearly brought Portland back in the fourth quarter, Ewing re-entered the game and helped end the Blazers' six-game winning streak.

Ewing hit a high-arcing jumper over Rasheed Wallace to give New York an 85-77 lead with 4:55 to play. After Wells scored, Ewing hit a baseline jumper and set up Marcus Camby underneath. Camby was fouled by Wallace and hit two free throws.

"He went on a very good sequence that I thought really spurred us on," Van Gundy said. "He made a couple of spot up shots that have been his signature on penetration for a long time."

Ewing then hit a spin move in the lane to make it 91-79, the Knicks' biggest lead of the game.

"He looked like the Patrick of old," Portland's Steve Smith said. "Give him credit, he still has it."

Wells scored all 18 of his points in the fourth quarter, including Portland's first 15 of the period. Steve Smith had 18, Damon Stoudamire 16 and Scottie Pippen scored 11 in his first game against the Knicks since leaving Chicago last year.

Wallace got ejected with 1:08 left and threw his wristband at referee Joey Crawford. It was Wallace's fourth ejection of the season.

The Knicks broke open a tight game in the third quarter, frustrating the Blazers with their aggressiveness, drawing fouls and grabbing offensive rebounds. New York used an 8-0 run to break a 56-56 tie and led 73-64 after three.

"Against a really good team, we can't afford to play like that," said Portland coach Mike Dunleavy, whose team beat San Antonio twice, Utah and the Lakers during its winning streak.

The Knicks, coming off their worst home loss of the year, came out firing, hitting five 3-pointers in a high-scoring first quarter. Portland led 29-28 before two of the stingiest defensive teams tightened up in the second quarter.

New York, playing without backup point guard Chris Childs, went to the big backcourt of Sprewell and Houston and scored one basket in 11 possessions. But Portland also struggled from the field, hitting 6 of 22 shots in the quarter and the Trail Blazers led 46-45 at halftime.