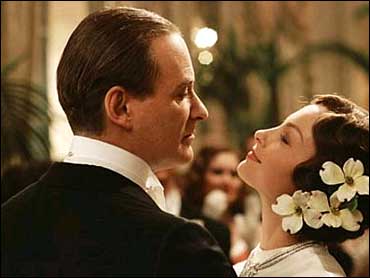 In the new musical biography "De-Lovely," Oscar and Tony winner Kevin Kline plays legendary composer Cole Porter. The film follows his musical career as well as the somewhat unique love story he shared with his wife of almost 40 years, played by Ashley Judd.

It's being billed as a musical love story.

Kline talks about the movie on The Early Show Monday.

The actor's introduction to Cole Porter came when he saw a friend in a performance of "Anything Goes" in his hometown of St. Louis, Mo. Since then, he's gone on to become an Academy Award-winning actor ("A Fish Called Wanda") and a two-time Tony winner for his musical performances on Broadway ("On the Twentieth Century" and "The Pirates of Penzance").

For "De-Lovely," Kline worked diligently to perfect his piano playing onscreen - a daunting task when portraying someone who made his living by composing on a keyboard. Another impressive aspect of Kline's performance was his insistence upon singing his songs live while filming.

Kline attended the St. Louis Priory School, an all-boys Catholic prep school run by Benedictine monks, from 1959 to 1965. He appeared in school plays there, and the school named its theater in his honor in 1997.

He attended Indiana University in Bloomington, where he majored in speech and theater. He studied music the first two years, and drama the second two. He also co-founded an off-campus theater company which performed revues.

He was a member of the first class of drama students to graduate from The Juilliard School in New York City.

Kline made an impressive screen debut as a charismatic schizophrenic opposite Streep in "Sophie's Choice" (1982). Over the next several decades, he has etched several memorable characters, including a revisionist Western hero in Lawrence Kasdan's "Silverado" (1985) and an Oscar-winning turn as perhaps the most stupid hit man ever in "A Fish Called Wanda" (1988).

He played dual roles of the U.S. president and his doppleganger in the comedy "Dave" (1993), and a Midwestern high school teacher who is "outed" as gay by a former student accepting a movie award in the box-office hit "In & Out" and as a cheating husband facing the changing times in 1973 in drama "The Ice Storm" (both 1997).

This season, he was nominated for a Tony award for his protrayal of Falstaff in a production of Shakespeare's "Henry IV."