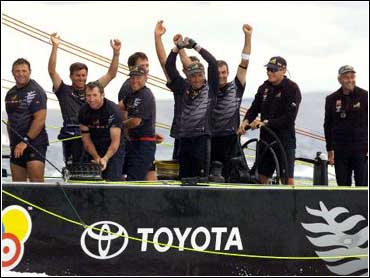 The protege won the prize while the skipper contentedly watched America's Cup history unfold from a chase boat.

New Zealand became the first country other than the United States to defend the oldest trophy in sports Thursday when it won the coveted Cup in a most unusual way.

In a move that probably only the Kiwis could pull off, veteran skipper Russell Coutts stepped aside hours before Race 5 in favor of 26-year-old Dean Barker. The Auckland native made his first America's Cup race a memorable one, the clincher of a sweep of Italy's Luna Rossa.

Coutts could have become the first skipper to win 10 straight Cup finals races. Instead, he watched from a chase boat on the gray, blustery Hauraki Gulf as the Kiwis sailed the untouchable Black Magic to their second straight 5-0 final, assuring that the 149-year-old America's Cup will remain at the Royal New Zealand Yacht Squadron.

"This morning Russell asked me if I wanted to go and race. How do you turn down an opportunity like that?" Baker said on the champagne-splashed ride back through a massive flotilla of pleasure craft and into the pandemonium of Viaduct Basin.

Tens of thousands of fans crammed the wharves, waving flags and red socks the Kiwis' good luck charms. Their cheers at times were drowned out by the blast of horns from the superyachts moored there.

"It's an amazing feeling to finish this off," Barker said.

When it came time to receive the gleaming, silver America's Cup, Coutts pulled rank and stepped up first, accepting it from the yacht squadron commodore. Barker joined his skipper, putting one arm around Coutts and the other around a bottle of champagne.

"Team New Zealand is the all important thing," Coutts said. "Look at them we're a great team. We're people who work together well and that's what it's all about."

With that, Auckland was set for one of its most festive nights ever.

"We don't celebrate very much but I'm predicting tonight will be a big one," Coutts said. "And I think as a team, we deserve it."

Sail trimmer Simon Daubney called Coutts' decision to hand the job over to Baker was "an ambitious move."

"A lot of people might say it's some sort of arrogance, but when it works, you can get away with it. It really is a team concept," he said.

The unflappable Barker was in good hands, counseled around the course by veteran tactician Brad Butterworth.

The 48-second winning margin was the closest of the series.

"I can't complain about the way he sailed today, and nobody else can," Butterworth said.

Within a minute of the finish, Coutts had jumped aboard Black Magic as the normally reserved Kiwis went wild.

There were no joyous faces among the Italian crewmen. Still, they managed to fly a farewell banner from Luna Rossa's mast saying: "Arrivederci New Zealand." A song called "Luna Rossa (Red Moon) blared in the harbor.

But soon afterward, crews from both boats were trading gear.

The Italians plan to be back here in 2003 or 2004, whenever the next defense is scheduled. The commodore of their yacht club even handed Team New Zealand CEO Sir Peter Blake a challenge minutes after the finish.

This is just the second time the Cup has been contested outside the United States. In 1987, Australia couldn't hang onto it, losing it back to U.S. skipper Dennis Conner.

Coutts' decision to take himself off the sleek, 75-foot yacht for the clinching race was probably the ultimate proof of New Zealand's depth and team concept.

He raised the possibility earlier in the series that he'd give Barker a turn on the wheel. Many thought it would be in Race 4, but with light, shifty conditions, Coutts steered Black Magic to victory on his 38th birthday.

It was Coutts who steered Team New Zealand to a 5-0 win over Conner off San Diego in 1995, one of the most dominating performances in America's Cup history, then got Black Magic four-fifths of the way home in this defense.

Of Team New Zealand's crew of 32, only 16 get to sail the boat. Coutts had that much faith in Barker, and apparently was content to share Charlie Barr's 97-year-old record of nine straight America's Cup victories.

"Charlie Barr probably would have done it, too," Coutts said, meaning turning the boat over to Barker.

Luna Rossa was trying to take the America's Cup back to Europe for the first time since Britain lost it to the yacht America in 1851.

The Italians were believed to have a silver bullet of a boat, but the Kiwis proved just as they did in San Diego that they're way ahead of the curve in boat design. And their crack crew never makes mistakes.

The Kiwis again led at every turning buoy on the six-leg, 18.5-mile course. That means they haven't trailed at 50 straight turning marks dating to the opening race of the 1995 America's Cup.

The wind at the start was 18 knots, the most on the Hauraki Gulf in a finals that saw four racing days wiped out by lack of wind.

Barker won the start, leading Luna Rossa across the finish line by 12 seconds. The Italians kept it close the first two legs, but Black Magic sped away the second time the yachts sailed into the wind, extending its lead to 48 seconds. The biggest advantage was 1:13 rounding the buoy for the final spinnaker run to the historic finish.