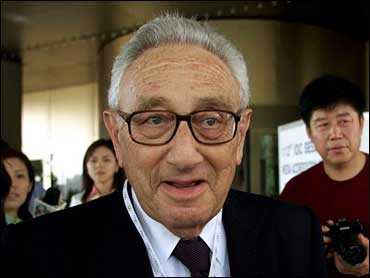 Notes and transcripts of phone calls Henry Kissinger made in the White House will be opened, giving the public its first look at records that President Nixon's baritone-voiced foreign affairs adviser has carefully guarded for three decades.

"To look at these transcripts is to be in the room when he's conducting all his telephone diplomacy - the secret opening to China, the secret trips to Paris on the Vietnam War negotiations, his backstage leaks to the press - you name it," said researcher Thomas Blanton.

Kissinger routinely had his secretaries tape the calls or listen and take shorthand on what was said, then type summaries, sometimes verbatim transcripts, of the conversations.

On Monday, the National Archives received copies of more than 20,000 pages of records detailing the phone conversations Kissinger had from 1969 to 1973 when he was Nixon's top foreign policy adviser.

"It will take up to a year to do a careful, page by page review of the documents before they can be opened to the public," said Karl Weissenbach, director of the Nixon Presidential Materials Project at the archives.

Late last year, Kissinger agreed to release 10,000 pages of notes and transcripts of phone calls made from 1973 to 1977, when he was secretary of state. Those records are still under review and have not yet been made available to the public.

The 1969-73 records were obtained in response to renewed pressure in the past three years from the National Archives and lawyers from Blanton's non-government group, the National Security Archive based at George Washington University.

They are not believed to contain tapes of his phone calls.

Kissinger has long considered the transcripts to be his personal property. He justified his decision to restrict access to them by saying much of the information could be found in other documents already open to the public.

He twice refused to let the National Archives inspect them to determine if they were government records.

Just before he left government service, Kissinger had all the phone records moved from his office at the State Department. Blanton said they were put in a vault at David Rockefeller's estate in New York.

They stayed there only briefly.

By the end of 1976, Kissinger had deeded the records to the Library of Congress but restricted public access to them until five years after his death.

After that, the records could be read by the public as long as the individuals on the other end of Kissinger's phone calls had also died, or approved of their release.

In the late 1970s, a reporter and two organizations sued Kissinger to gain access to the records.

A federal court ruled the documents were government records because they were prepared on government time by government employees. The court said the records should be returned to the State Department.

In 1980, the Supreme Court reversed the decision, saying private parties could not sue to gain access to them under the Freedo of Information Act. The court said the government could seek their return, but no agency tried until the last few years.

On Monday, the documents arrived at the National Archives complex in College Park, Md. "We made copies of the papers at the Library of Congress and we picked them up this morning," Weissenbach said.

By Deb Riechmann
© MMII The Associated Press. All Rights Reserved. This material may not be published, broadcast, rewritten, or redistributed