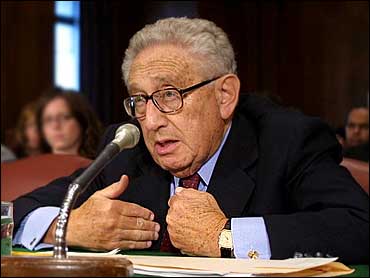 The announcement came as the president signed the bill authorizing the commission, which the White House resisted until just two months ago.

"Dr. Kissinger will bring broad experience, clear thinking and careful judgment to this important task," Mr. Bush said at a signing ceremony in the Roosevelt Room of the White House. "Mr. secretary, thank you for returning to the service of your nation."

Kissinger, 79, served as national security adviser under Presidents Nixon and Ford and secretary of state under Mr. Ford. He won the 1973 Nobel Peace Prize.

The National Commission on Terrorist Attacks Upon the United States has a broad mandate, building on the limited joint inquiry conducted by the House and Senate intelligence committees. The independent panel will have 18 months to examine issues such as aviation security, diplomacy, terrorist financing and border problems, along with intelligence.

Mr. Bush called on members to report back sooner than in 18 months time, saying the nation needed to know quickly how it can avoid terror attacks in the future. "The sooner we have the commission's conclusions, the sooner we can act on them," he said.

However, Mr. Bush did not set as a primary goal for the commission to uncover mistakes or lapses of the government that could have prevented the attacks. Instead, he said it should try to help the administration learn the tactics and motives of the enemy.

"This commission will help me and future presidents to understand … the nature of the threats we face," he said in a ceremony with survivors, families of victims, and advocates of the bill, including lawmakers.

He pledged his administration will "continue to act on the lessons we've learned so far to better protect the people of this country. It's our most solemn duty."

The commission's creation is part of a bill authorizing intelligence activities in the 2003 budget year. Though most details of the legislation remain secret, lawmakers say it provides the biggest-ever increase in intelligence spending in an attempt to fix some counterterrorism weaknesses — such as a lack of information-sharing, experts in certain key languages and attention to traditional, human spying.

The bill requires a database of known or suspected international terrorists. Two of the Sept. 11 hijackers were placed on a State Department watch list in the weeks before the attacks, but other agencies were not notified.

It also establishes a new center to help intelligence agencies quickly translate foreign languages; provides millions for the study of languages key to national security; and calls for a standard way for all agencies to spell names from other alphabets.

Unlike the signing ceremonies earlier in the week for bills creating the Department of Homeland Security and a new federal commitment to terrorism insurance, Wednesday's signing was a low-key affair.

Like the Homeland Security Department, the independent commission was an idea to which Mr. Bush's support came late.

The White House held that only Congress should investigate, arguing that an independent probe could distract administration officials from anti-terrorism efforts. The change of heart came in September, as family members of Sept. 11 victims applied pressure and congressional hearings began to uncover intelligence and law enforcement failures.

Mr. Bush insisted only a bipartisan group should be able to compel testimony and documents, fearing that one-party subpoenas would lead to ineffective finger-pointing and allow the panel to be used merely to score political points.

The 10-member commission will be evenly divided between Republican and Democratic appointees. It will take at least six members, in most cases, to approve subpoenas.

Kissinger was born in Germany in 1923 and his family emigrated to the United States in 1938. He served in a counterintelligence unit in the United States Army and then attended Harvard University, receiving his doctorate in 1954.

Prior to entering full-time government service, Kissinger taught at Harvard, did work for the Rockefeller foundation and Rand Corporation and served as an advisor to numerous government task forces concerned with foreign policy, military matters and arms control.

In 1969, President Nixon named him national security advisor, a position he held until 1975. During that time, he was the architect of U.S. foreign policy. His notion of "triangular diplomacy" informed relations with Soviet Russia and Communist China, which culminated in arms control talks with Moscow and Mr. Nixon's visit to China in 1972. He also worked to secure peace after the 1973 Arab-Israeli war.

Kissinger helped coordinate American efforts in Vietnam, winning the Nobel peace prize in 1973 for negotiating the Paris treaty that ended American involvement in the conflict there. However, critics of Kissinger blame him for proposing controversial moves such as the Christmas bombing of Hanoi, and the secret bombing and subsequent invasion of Cambodia.

Since leaving government, Kissinger has written several books and remained a popular speaker around the world, often appearing in television interviews as a commentator on foreign policy issues of the day.

However, criticism of Kissinger's policies in Southeast Asia and Latin America has not ebbed. In a series of articles in 2001, writer Christopher Hitchens accused Kissinger of war crimes for the bombing of Cambodia, for his failure to head off Indonesia's conquest of East Timor in 1975 and for his alleged support for a coup against Chilean president Salvador Allende on Sept. 11, 1973.

In April, when Kissinger was visiting London, a Spanish judge asked British authorities to deliver a warrant to question Kissinger over the disappearances of Spanish citizens under Latin American dictatorships. The warrant was not served.