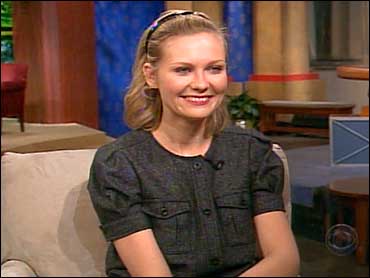 Even Spiderman couldn't save Kirsten Dunst from a robbery in New York City; instead the damsel in distress was on her own.

Dunst was in the city to shoot scenes for the upcoming film "How to Lose Friends and Alienate People." She had left her suite at the SoHo Grand Hotel early Aug. 9, when the thieves slipped in.

A surveillance camera showed the burglars leaving the hotel, according to the complaint filed in the case. It said they also got away with $2,500 in cash, credit cards, two digital cameras and an iPod music player.

One suspect, Jarrod Beinerman, 33, was being held on $50,000 bond after being arraigned in a Manhattan court Wednesday on burglary and grand larceny charges.

Beinerman's lawyer, James Kirschner, told the judge the surveillance camera showed his client wasn't carrying anything in his hands when he left the SoHo Grand. Kirschner said Beinerman had heard a movie was being filmed at the hotel and "went there to check out what was going on."

Authorities have since recovered the credit cards, IDs and cell phone.

A Dunst spokesman and a SoHo Grand manager did not immediately return telephone messages left at their offices early Friday.

Dunst, 25, has starred in numerous movies, including the "Spider-Man" series, "Marie Antoinette" and "Mona Lisa Smile." People magazine named her one of the world's 50 most beautiful people in 2002.