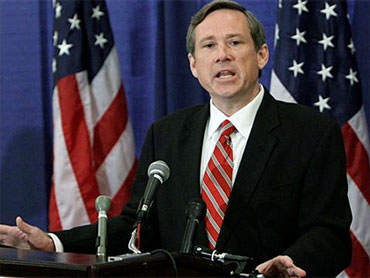 Republican Senate candidate Mark Kirk publicly apologized Tuesday for being "careless" in describing his military service and background, after a series of embellishments were revealed that could threaten his bid for President Barack Obama's former seat.

After a month of eluding questions and relying on written statements by his campaign, Kirk offered the mea culpa at his first news conference since reports surfaced about his false claims, including a prestigious military award that he didn't win.

"I have made mistakes concerning certain aspects of my accomplishments and experience and I apologize for those mistakes and I pledge to correct those errors," Kirk, a five-term congressman from Chicago's northern suburbs, told supporters and reporters. "I am not perfect and was careless. I will do better and I will make sure that this never happens again."

As Kirk apologized, however, he also acknowledged something his campaign had flatly denied just two weeks ago - that he was twice scolded by the Pentagon for improperly mingling politics with his military duties. He also tried to address criticism that he has made too much of his past teaching experience.

He and Democrat Alexi Giannoulias, Illinois' first-term state treasurer, are locked in a tight race for a seat in one of the highest-profile Senate races in the country. Obama held the seat for four years before winning the White House, and a Democratic loss would be a major embarrassment to the administration.

Kirk's embellishments revealed over the past several weeks have become the focus of the race after Republicans had spent weeks attacking Giannoulias over the failure in April of his family's Chicago bank.

"Allow me to be blunt: Congressman Kirk wasn't careless and he didn't misremember - he lied," Giannoulias spokesman Matt McGrath said. "One mistake is careless. Misrepresenting, embellishing or not telling the truth about 10 different phases of your military career over a 10-year period is a pattern of lies, plain and simple."

Kirk's campaign had said earlier this month that he never violated Pentagon policies in response to a blogger who disclosed a Defense Department memo referring to Kirk being "counseled" for political activity while on duty. His campaign called the document "a baseless political ploy."

But Kirk acknowledged Tuesday that he was counseled in late 2008 after he gave interviews about former Illinois Gov. Rod Blagojevich's arrest and then for a Twitter post he said his staff made in July 2009 when he was on duty.

He also explained that he worked as a teacher for a year in England and spent time working in a nursery during his senior year at Cornell University.

"I think on going back 30 years to my experience as a work-study nursery school teacher we might be getting into what the far-edge of what criticism should be," he said. "But I take this all very seriously. This is a high office, great trust is put in the people that we entrust with this office and I think the scrutiny is absolutely appropriate."

Kirk said voters should trust him in part because of his career in public service.

His problems began with the revelation last month that his frequent references to being named the Navy's intelligence officer of the year were false. Instead, a unit Kirk led won a different award.

That was followed by a string of other errors and exaggerations.

A letter from his office said he served in the first Gulf War when he did not. He has also referred to serving in the invasion of Iraq, although his duties kept him stateside. He said his Reserve work sometimes includes running the Pentagon war room, even though he oversees only the intelligence operations.

Although he had clearly described coming under fire while flying missions over Kosovo and Iraq, Kirk began to hedge and say the he couldn't be sure his plane was targeted by the anti-aircraft fire. And he didn't mention that he rode along on only a handful of flights - perhaps just three.