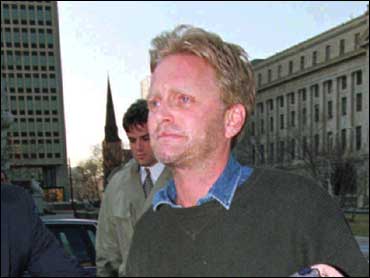 Eric Douglas, 46, was discovered after someone flagged down a passing police car. There were no signs of foul play, police said. An autopsy was planned.

Eric Douglas was an aspiring actor and comedian, but he never found the success of his father or of his Academy Award-winning sibling, Michael Douglas. He had a short-lived acting career in the 1980s and early '90s, playing supporting roles in movies such as "Delta Force 3: The Killing Game."

He also appeared in an episode of the HBO program "Tales From the Crypt" opposite his father, who earned an Emmy nomination for his role on the show.

In recent years, the youngest of Kirk Douglas' four sons drew attention more for his problems than for any performances. In a 2000 interview, he said he spent eight days in a coma after a pill overdose a year earlier.

For years before that, Eric Douglas struggled with drug and alcohol addictions while repeatedly clashing with the law. He spent time behind bars and in rehabilitation clinics.

In 1997, he pleaded guilty to cocaine possession after his arrest for accepting a shipment of more than 1,000 anti-depressant pills.

A year earlier, he spent the night in jail after smashing his rental car into two vehicles in an alleged drunken-driving incident.

In 1996, Eric Douglas spent a month in jail after a flight from Los Angeles to Newark, N.J., in which he allowed his dog to roam the airplane while he became "loud and verbally abusive" toward the crew, authorities said.