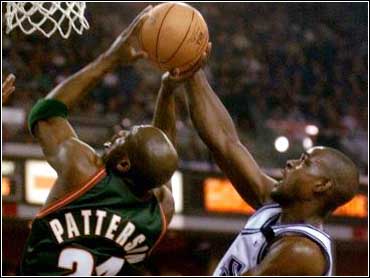 Reserve Predrag Stojakovic scored a season-high 21 points and Corliss Williamson had 15 Friday night as the Sacramento Kings built an early lead and routed the Seattle SuperSonics 118-85.

Sacramento, which had lost two straight and eight of 13, led by 18 points at halftime.

Jason Williams had 13 points and seven assists for the Kings. John Barry added 12 points and Scot Pollard had eight points and 14 rebounds.

Gary Payton, who had a career-high 41 points in his last game, shot 4-of-19, finishing with 13 points and 12 assists for the Sonics. Brent Barry made five 3-pointers and had 21 points and Vin Baker scored 19.

Stojakovic, who had four of the Kings' 11 3-pointers, made consecutive 3s in the fourth quarter.

Trailing by 18 points, Seattle opened the third quarter with 10 straight points, six of them coming on two 3-pointers by Barry.

Sacramento responded with a 15-4 run. The Kings built the lead to a high of 21 points and led 82-64 heading into the fourth period.

The Kings enjoyed an outstanding first half, shooting 51 percent, outrebounding the Sonics and using a big second quarter to go ahead 62-44.