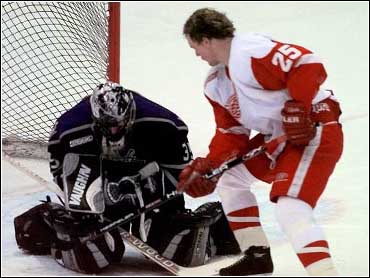 Los Angeles goalie Stephane Fiset has a simple explanation for why the Kings have suddenly become one of the NHL's toughest teams to beat.

"We're playing good right now, and it's fun," Fiset said after he made 33 saves and the Kings won their fifth straight Friday night, 3-2 over the Detroit Red Wings.

Luc Robitaille's tiebreaking goal early in the third period held up as the Kings snapped the Red Wings' four-game winning streak. Detroit fell three points behind St. Louis in their race for first place in the Central Division.

Red Wings star Sergei Fedorov injured his right hand and bruised a knee when he was checked into the boards by Bob Corkum in the second period and did not return.

"We're going to practice (Saturday) and see how he is then," Detroit coach Scotty Bowman said. Fedorov has already missed nine games this season with other injuries.

Robitaille scored his 30th goal 1:44 into the third by wristing a shot from the left circle through the legs of Chris Osgood, breaking a 2-2 tie.

Ian Laperriere and Glen Murray also scored for the Kings, who have won the first two games of a seven-city road trip. Los Angeles has won seven of its last eight and eight of 11. The Kings are 2-1-1 against Detroit this season.

"We've battled the Red Wings hard all year," Kings coach Andy Murray said. "We've had three good games here (going 1-1-1). They're a great team. We knew we'd have to play a great game to beat them here and we got outstanding goaltending.

"None works harder than Stephane Fiset. It's nice to see him rewarded tonight."

Fiset's best stop came on a shot from Yzerman in the second.

"You just have to be patient," Fiset said. "If you make the first move, you're done because he's such a great player. If you're overaggressive, they're going to make a pass to the other side."

Robitaille has five goals in his last four games and at least one point in eight straight. Zigmund Palffy and Jozef Stumpel had assists on Robitaille's goal, giving their line 45 points in the Kings' last eight.

"They've got some good players," Detroit's Igor Larionov said. "Palffy's playing great for them, they're playing disciplined hockey, so that's nice to see. They've got a good coach, too."

Osgood stopped 20 shots as the Kings were 0-for-7 on the power play.

Yzerman scored the only goal of the first period. With the Red Wings skating 5-on-3, Yzerman, who went 11 games without a goal before scoring two Wednesday against Vancouver, shot through traffic from the right circle and beat Fiset.

Laperriere and Glen Murray scored goals 54 seconds apart to give the Kings a 2-1 lead early in the second period.

Laperriere broke in with a pass from Donald Audette and beat Osgood from point-blank range at 4:01, and Murray scored on a breakaway at 4:55.

"Of course it's a big loss," Larionov said. "Sergei's been playing great hockey lately. I hope he'll be back next game. The game was on the line, I think it was a 2-2 score, and to lose Sergei was a big, big loss."