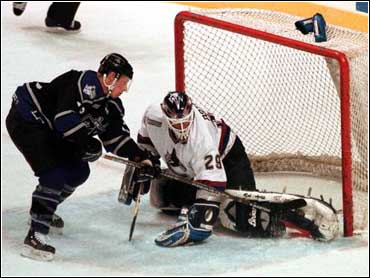 Stumpel made it 4-0 with his goals early in the second period as the Kings improved to 9-3 in their last 12 games.

Stumpel scored the winning goal 23 seconds into the second period, then added his second 2:54 later after a miscue at the Vancouver blue line gave the Kings a 2-on-1 break. Vancouver goaltender Felix Potvin stopped Stumpel's first shot, but couldn't control the rebound and Stumpel put it into a wide open net.

Vancouver pulled Potvin with 5:14 left after the Kings' Ian Laperriere took a minor penalty for obstruction holding. Trent Klatt then made it 4-2 on the power play. The Canucks continued to pressure Los Angeles, but couldn't beat Kings goaltender Stephane Fiset. Glen Murray scored into an empty net with 36.9 seconds remaining.

Fiset stopped 21 shots for Los Angeles and improved to 16-14-4 on the season. Fiset had a shutout going with 5:41 to play in the third period, but was beaten by defenseman Ed Jovanovski, who skated in from the point and snapped a wrist shot from 20 feet under Fiset's glove.

Luc Robitaille extended his point-scoring streak to 12 games with an assist on Stumpel's first goal. Robitaille has 10 goals and 10 assists over that stretch.

Los Angeles outshot Vancouver 26-12 in the first two periods and finished with a 31-28 advantage.

Los Angeles opened thscoring in the first period when Len Barrie one-timed a rolling puck from 20 feet that beat Potvin on the stick side. Craig Johnson made it 2-0 when he batted a rebound past Potvin with 4.6 seconds left in the first period.