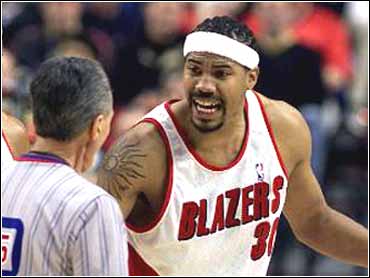 The Sacramento Kings have emphatically altered the debate about which team is best out West.

Chris Webber scored 34 points and converted a key layup off a missed free throw as the Kings defeated the Portland Trail Blazers 111-101 Saturday in a magnificent showdown between the top teams in the Western Conference.

"It's definitely the first time in my career that I honestly believe we can control our own destiny," said Webber, who also had 10 rebounds, six assists and four steals. "We want the homecourt advantage. We want to show everyone that we are not just good on paper, we're good on the floor."

Predrag Stojakovic added 20 points for the Kings, who have won four straight and 13 of their last 17. Sacramento (27-10) pulled within a half-game of the Blazers (30-12) in the Pacific Division, although the Kings have a better winning percentage. Only Philadelphia (30-9) has a better record.

"Before, we just lose it in the fourth quarter, but this time we played strong," Stojakovich said. "This gives us big confidence."

Rasheed Wallace scored 25 points and Damon Stoudamire had 21 for the Trail Blazers, who had won three straight and 13 of 14.

"That was a tough way to lose a ball game," Blazers coach Mike Dunleavy said. "Turnovers were the killer for us."

The Blazers committed 18, and trailed by nine with a little more tha five minutes remaining, but got within 98-97 on Wallace's 3-pointer with 2:14 to go. After Webber and Portland center Arvydas Sabonis traded long jumpers, Stojakovic hit a short jumper and got fouled. The free throw made it 103-99 with 1:20 left.

Two free throws by Wallace cut the lead to two, but at the other end, Sacramento's Hidayet Turkoglu got bumped by Steve Smith, and went to the line. His first shot was good, but the second was off, and Webber outjumped Wallace for the rebound.

The Kings shot a season-high 55.8 percent, eclipsing their 55.7-percent effort in Wednesday night's win over Boston.

Sabonis added 18 points for Blazers, who shot 55.7 percent but made just 6 of 19 field goals in the fourth quarter. Only Portland and the Celtics have shot at least 50 percent against the Kings this season.

Scottie Pippen, who missed six straight games with a sore right elbow, had two points on 1-for-6 shooting in a reserve role.

Portland, which lost the first meeting between the teams in November, is 4-6 against the Pacific and 26-6 against the rest of the league.

The Blazers trailed by nine early in the third but went on a 17-2 run to get back in the game. They came undone in the fourth, however, by going 5:12 without a point. That allowed the Kings to go on an 8-0 run, capped by Tukoglu's 3-pointer.

"On paper it looks like we did a good job, but two things turnovers and not getting to the free throw line hurt us," Portland's Steve Smith said.

Each team shot just over 68 percent in the first quarter, setting the stage for an entertaining battle.

The Blazers made eight of their first 11 shots, while the Kings made 12 of their first 16. A 3-pointer by Wallace with 2.5 seconds left put Portland ahead 34-33 after one period. Webber had 14 points on 6-of-8 shooting.