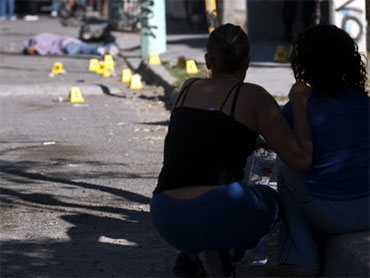 After a two-year battle that has killed more than 5,000 people, Mexico's most powerful kingpin now controls the coveted trafficking routes through Ciudad Juarez. That conclusion by U.S. intelligence adds to evidence that Joaquin "El Chapo" Guzman's Sinaloa cartel is winning Mexico's drug war.

The assessment was made based on information from confidential informants with direct ties to Mexican drug gangs and other intelligence, said a U.S. federal agent who sometimes works undercover, insisting on anonymity because of his role in ongoing drug investigations.

The agent told The Associated Press those sources have led U.S. authorities to believe that the Sinaloa cartel has edged out the rival Juarez gang for control over trafficking routes through Ciudad Juarez, ground zero in the drug war.

Other officials corroborated pieces of the assessment. Andrea Simmons, an FBI spokeswoman in El Paso, confirmed that the majority of drug loads arriving from Juarez now belong to Guzman. And Mexican Federal Police Chief Facundo Rosas told the AP that while authorities are still working to confirm the U.S. assessment, "These are valid theories."

The twin border cities of Ciudad Juarez and El Paso, Texas, are a primary crossing point for drugs smuggled into the United States. Control of drug routes in Chihuahua, the state along New Mexico and West Texas where Juarez is located, is vital to Guzman's efforts to grow his massive drug cartel's operations.

Already, the Sinaloa cartel is the world's largest, and Guzman last year made Forbes magazine's list of the world's top billionaires.

His cartel moved in on the city in 2008 in an attempt to wrest it from the Juarez cartel led by Vicente Carrillo Fuentes. The fighting prompted Mexican President Felipe Calderon to send thousands of army troops to the city, but the fighting has killed more than 5,000 people, making Juarez one of the world's deadliest cities.

A Guzman victory may not immediately halt the gang warfare in Juarez's streets. But those gangs "are fighting over crumbs. They're fighting over the retail sales in Juarez," Ciudad Juarez Mayor Jose Reyes Ferriz told the AP.

And the U.S. agent warned that Carrillo Fuentes is unlikely to give up the fight entirely as long as he is alive and free. 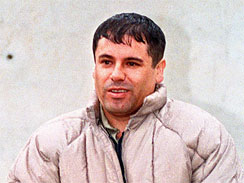 The Sinaloa cartel has grown steadily more powerful since Guzman escaped from a Mexican federal prison a decade ago by hiding in a laundry truck, even as successive Mexican governments - including that of Calderon - have faced accusations that they have not pursued the Sinaloa cartel as aggressively as other gangs.

"We've certainly seen them get stronger," said a U.S. law enforcement official in Mexico, who spoke on condition of anonymity because of security reasons. The Sinaloa cartel is "the most powerful drug trafficking organization in the world."

Several of Guzman's rival kingpins have been taken down by President Felipe Calderon's intensified, military-led crackdown on drug trafficking, including Arturo Beltran Leyva, who was killed in a shootout with Mexican marines in December, a year after his gang is believed to have split with the Sinaloa cartel.

The Sinaloa cartel has been steadily moving in on the lucrative smuggling routes into the United States, which consumes more drugs than any other country.

Most recently, officials and experts believe the cartel is trying to take over a series of small farming towns east of Juarez. The towns, across the Rio Grande from the Texas farming towns of Fabens and Fort Hancock, had long been under the control of the Juarez cartel and were historically used as staging areas for drug smugglers. But the arrests or killings of local smugglers have left it vulnerable to attacks by Sinaloa leaders.

In Ciudad Juarez itself, the majority of drug suspects in jail belong to gangs allied with the Juarez cartel. Since August, more than 50 Juarez cartel allies have been arrested in the city, compared to only 18 suspects tied to Guzman's organization.

The Juarez-aligned Azteca and La Linea gangs are struggling to maintain their traditional dominance of the city as they fend off constant assaults from the Sinaloa-aligned Killer Artists and Mexicles gangs and from Mexican law enforcement.

"The onslaught against the Juarez cartel has been very brutal, not only by the Chapo Guzman cartel but also the military," said Tony Payan, an expert on the Juarez drug war at the University of Texas-El Paso. "I don't think by any means the Juarez cartel is done, but it's a shadow of its former self."

Payan said much of the recent violence in Juarez can be attributed to Guzman's men killing off Carrillo loyalists, including "stragglers" who have so far evaded them and continue to deal drugs on Juarez streets.

"The killings, they are mostly small retail people," Payan said. "I think they are Aztecas, falling like flies all over the city."
By Associated Press Writers Alicia A. Caldwell and Mark Stevenson; AP Writer Alexandra Olson in Mexico City contributed to this report