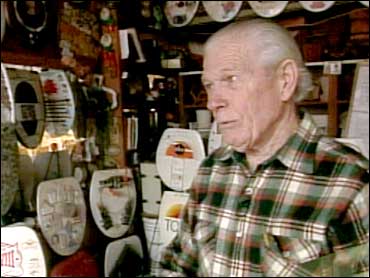 Some say having a hobby will keep you young.

The Early Show Correspondent Melinda Murphy found one person in San Antonio, Texas, who just may prove that opinion to be true.

Smith has a passion for art, but it's a very unusual kind of art that keeps the 82-year-old so spry.

From the outside, the Toilet Seat Museum looks like a giant outhouse. And, Barney Smith is king of the thrones.

Over the past 35 years, the retired master plumber has made almost 700 toilet toppers. A few take your breath away. Others are like a trip to the dentist, and some are truly frightening.

It all started with antlers.

"My dad and I would go hunting and get a little buck," says Smith. "I would cut its horns off, and I picked up a toilet seat one day, a good lid, and I put my horns on that and hung it up. I said, 'Well, I like the idea of that becoming a wall plaque.'"

So it began. But the first wooden wonder to actually become a museum piece was made with dog tags.

Smith promised his wife he would stop making toilet seat plaques at number 500.

"Since I started out with dog tags, I need to fix some dogs on there," he says. "I put that at number 500. That's the one that I was supposed to quit at … But I didn't. And, I've been in the doghouse ever since."

That's because his wife of 64 years thinks his hobby is a load of hooey, but not everybody in the family sees it that way.

"It's weird. I mean -- toilet seats. You wouldn't think toilet seats. You'd think canvasses," says Smith's great-granddaughter. "So, it's different. I mean, having a semi-famous grandfather is kind of cool."

Smith is "semi-famous" because about 1,000 visitors go to see the museum annually.

Some think it's true art.

"It's so interesting to me how Barney has captured the entire history of our small community and his life as well," says Chris Disabto, Smith's neighbor. "It's just a unique way to do that. Some people keep journals. Some people write diaries. Barney creates his art."

He gets his inspiration from just about anywhere -- his life, pop culture and even current events.

And there's no real end in sight. Smith has lots of ideas waiting in shoeboxes.

There's one little thing Smith really wants, but doesn't have. It belonged to his wife.

"She had gallstone surgery. I did get her IVs and everything that pertained to her surgery," Smith says. "I've got that on a toilet seat, but not the gallstones … She's got them hidden from me.