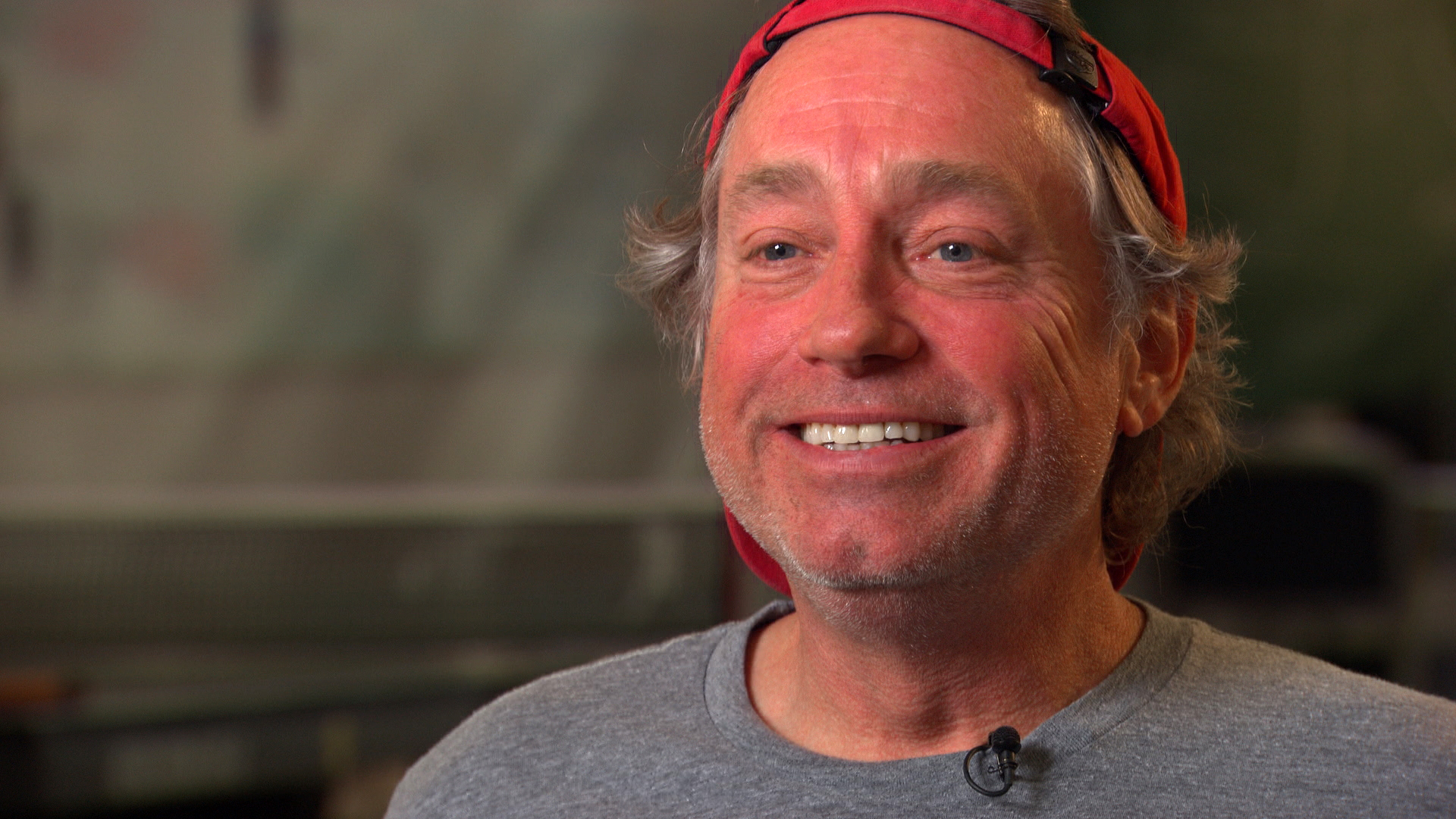 There are more gyms in America than ever before but we're more overweight than we've ever been. Lots of people have theories as to why, but we're about to introduce you to a man who says he's figured it out. Greg Glassman is the unlikely creator of the biggest fitness phenomenon in the world right now, called "CrossFit."

It's a workout program that's unpredictable, uncompromising, and raw…a lot like the man who created it. Glassman likes to say he runs CrossFit more like a biker gang than a business, but business is booming. As we first told you in 2015, the king of CrossFit has created the largest gym chain in history and turned fitness into a spectator sport.

In 2014, the finals of the CrossFit games were broadcast on ESPN. Forty-five thousand people showed up to watch contestants who looked like superheroes heave, jump, and lift until a champion was crowned.

"Rich Froning is the fittest man in history!"

If this is the body that defines a new kind of fitness...

The brain that dreamt it all up belongs to Greg Glassman. Well before CrossFit was a competition, he designed it as a new way to workout. He says it can transform anyone, and he's not just talking about bulging biceps and six-pack abs.

Greg Glassman: I'll deliver you to your genetic potential.

Sharyn Alfonsi: It sounds like you're creating a robot or something?

Greg Glassman: Look at her, she was meant to look like that. That's what nature would have carved from her a million years ago or she'd have been eaten.

Greg Glassman hardly looks like an exercise guru. There's no hint of ripped muscle underneath his untucked shirt, but he is widely considered the most powerful man in fitness today.

Glassman is the architect of CrossFit. A workout program that mixes elements of weightlifting, calisthenics, and gymnastics. The classes take place in what CrossFitters call a "box"...a stripped down, willfully ugly space.

The exercises range from simple to sadistic and made Greg Glassman, a college dropout, a multi-millionaire.

Sharyn Alfonsi: So, what'd you do?

Greg Glassman: I invented that doing lateral raises and curls while eating pretzels is dumb. That's what I invented.

He says for decades gym owners have ignored the importance of diet and been all too happy to watch their members fall into a trance on the treadmill.

Greg Glassman: Well, I mean, look, you get sweaty and you come home tired. I can appreciate that. But-- many people are much closer to doing nothing than they perhaps realize.

"I invented that doing lateral raises and curls while eating pretzels is dumb. That's what I invented."

Sharyn Alfonsi: Is everything up till now been wrong in the fitness industry?

Greg Glassman: Yes. Yeah. As far as I can see.

CrossFit classes usually don't take more than an hour. Athletes compete against each other and the clock.

To keep their energy up, they're encouraged to follow something called a Paleo diet: heavy on meat and vegetables -- food fit for a caveman.

Sharyn Alfonsi: I have heard you say that CrossFit prepares athletes for, quote, "the unknown and the unforeseen."

Greg Glassman: It's the u--

Sharyn Alfonsi: It sounds like you're getting ready to go to war.

CrossFit -- he says -- is creating a new "super breed" and, although some of their athletes appear to be carved out of marble, he says the focus isn't big muscles, it's simple, functional movements like squatting and lifting whether you're 25 or 75.

Greg Glassman: Uh-huh. Yeah. To say no is to say that, if you drop your pen on the ground, you're not gonna pick it up. It's a deadlift. It's picking something off the ground. It does not require a physician's OK. If your physician doesn't think you should deadlift, you need to get a new doctor is what you need.

He had polio as a child and used gymnastics to regain his strength. In high school, a bad dismount left him with a permanent limp. He became a personal trainer and started experimenting with some of the exercises that would become the backbone of his creation.

His workouts were loud, disruptive and gym owners were not impressed.

Sharyn Alfonsi: How many gyms did you get tossed out of?

Greg Glassman: About five or six.

Sharyn Alfonsi: You don't like being told what to do.

Greg Glassman: Oh, I don't mind being told what to do. I just won't do it. Say anything you want.

He opened his own gym in Santa Cruz in 2001. Today, there are 14,000 CrossFit boxes around the world. Each one defiantly barren.

The company is private but estimated to be worth hundreds of millions of dollars and Greg Glassman owns 100 percent of it. He has no board of directors and says he never had a business plan.

"This is awesome. Can I have a picture with you?"... Greg Glassman: I would love that.

But recently found himself at Harvard Business School...

Greg Glassman: You like metrics? You like money? We're the fastest growing large chain on Earth. We have broken all records.]

...where he was invited to share the secrets behind CrossFit's meteoric growth.

One reason CrossFit's grown so fast is because just about anyone who wants to open a "box" can after paying a $3,000 yearly fee and passing a two-day seminar. It's how the company makes most of its money.

Sharyn Alfonsi: "Two days to take a course, then I can open a gym?"

Sharyn Alfonsi: I mean, to me, is that enough?

Greg Glassman: Well, the-- here was the alternative. Here's what it used to be: All ya had to have was the money. And you don't even have to take a test. That's where every other chain came from, someone just launched 'em.

And unlike most gym chains, Glassman, a die-hard libertarian, relinquishes nearly all control over his affiliates. They can open a box next door to another box if they want. It's probably not surprising, Glassman believes the strongest one will survive.

Sharyn Alfonsi: You don't have an iron fist on them on how they do this--

Greg Glassman: Nope. It's not a franchise. It's--

Sharyn Alfonsi: --they can do it any way they want to do it.

Greg Glassman: --this isn't Kentucky Fried Chicken or-- yeah, it's-- it's CrossFit.

Sharyn Alfonsi: You let them do what they want to do once they--

Greg Glassman: I do.

Although, he occasionally fires up the company plane, grabs the family dog and drops in on an affiliate unannounced.

Sharyn Alfonsi: So you're not going in there looking for trouble?

Greg Glassman: Not at all. But if I saw someone pulling with their arms or a rounded back, I think it's inevitable that I would say something.

At the company's media office in the Silicon Valley they publish a different "workout of the day" every day and more information about CrossFit than you could read in a lifetime.

Sharyn Alfonsi: And what does it cost for people to access the stuff that you're putting online?

Greg Glassman: There is no cost. [Sharyn Alfonsi: How does that make sense?] It's free.

Greg Glassman: Yeah. It didn't until we did it, you know, the more video we give away, the more money we make.

CrossFitters created a huge virtual community. Posting videos of workouts and wipeouts and spreading Glassman's gospel around the world in Africa, Siberia, and on the frontlines of Afghanistan and Iraq.

Whether soldiers or soccer moms, the evangelical enthusiasm of Glassman's disciples...

...has led to criticism.

Sharyn Alfonsi: When you hear people describe CrossFit as a cult, what do you--

Greg Glassman: --mind that. What if someone led a cult and they didn't know they were? I mean, that would be messed up, right? To-- so I started to kinda try to think what makes us a cult and what would define a cult. One is recruiting. And I ain't recruitin' anybody. I don't-- you know what, you guys-- people call me up, "Hey, I was thinkin' about joining CrossFit." "Well, then call back when you've decided to," you know?

Sharyn Alfonsi: So the doors are open, you're not recruiting--

Greg Glassman: Yeah, we're not recruiting, we're not barring the doors. I mean, it really is an open house.

Glassman says he spends most of his time defending the CrossFit brand with an iron fist.

Greg Glassman: If you don't defend it, you won't have a brand for long. We are in shark-infested waters and I've got--shark-repellent attorneys.

Sharyn Alfonsi: How many attorneys do you have working for you now?

CrossFit is not afraid to flex their legal muscles.  They have a small in-house team of lawyers on the payroll, but also currently have retained another 60, six – zero, outside law firms to defend their reputation and trademark.

They've gone after a company selling bogus CrossFit-branded jump ropes, taken on gyms in Puerto Rico and Germany who used their name without permission and successfully sued the publishers of a study that contained made-up information about CrossFit's safety record.

Greg Glassman: I know. It's weird.

Sharyn Alfonsi: So how many lawsuits have you been involved in?

Greg Glassman: I do. Yeah.

His most tenacious fight revolves around headlines that CrossFit could be dangerous or worse, deadly. Some journalists have questioned how the regimen might be bad for one's back, shoulders or even kidneys.

Because it's such a new phenomenon, there aren't many studies about the overall safety of CrossFit. The few that exist, found it to be about as safe as gymnastics or weightlifting and less likely to cause an injury than running.

Greg Glassman is so sure it's safe, the father of six allowed his future seventh child to be part of this class.

Sharyn Alfonsi: To that person who's sitting in their living room saying, "This all sounds interesting, but I-- you know, I've heard things and I don't wanna get hurt"?

Greg Glassman: Stay in your chair where you're sure to get hurt, and you'll become one of the 300,000 people that will die next year from sitting in their chair doing nothing.

Another reason Glassman's been so good at getting people out of their chairs is the success of the CrossFit games. This year 380,000 people around the world competed for a chance to be featured in the finals.

It is a spectacle. Part Olympic Games, part Hunger Games. And the winner is crowned the fittest man or woman on Earth...

A title you'll be shocked to learn Greg Glassman had his lawyers trademark. He told us no one in the world is in better shape than the Games' top athletes.

Sharyn Alfonsi: You bet the mortgage not the rent on the--

Greg Glassman: I bet everything on it. You're gonna come and best the Games athletes out of nowhere, the same way you're gonna walk out here on the street and put together a Stanley Cup challenge out of morons walking by. It ain't gonna happen.

The games are sponsored by Reebok. CrossFit is credited with re-energizing the Reebok brand and boosting sales.

But five years into a 10-year deal that may be CrossFit's most important commercial partnership, Glassman has developed some strong opinions about Reebok's owners, the German company Adidas, and he wasn't shy about sharing them on 60 Minutes.

Sharyn Alfonsi: To who?

Greg Glassman: Someone young, fresh, excited, and willing to enter into the modern era of things.

Sharyn Alfonsi: --for you to say.

Sharyn Alfonsi: Does anyone ever say to you, "Greg, like, you shouldn't say that"?