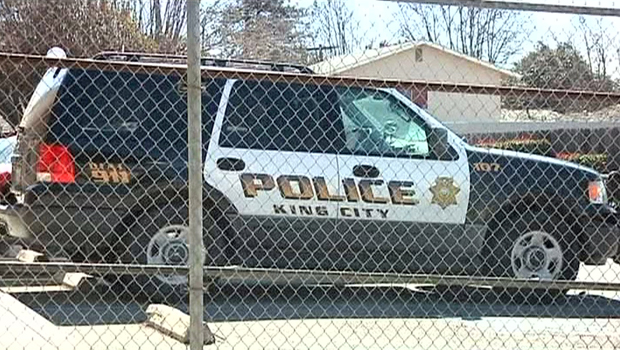 KING CITY, Calif. -- One-third of a central California town's police force was taken off duty after several officers were arrested in a scheme to take for themselves the impounded cars of some poor Hispanic residents, authorities said.

In the scheme, vehicles were impounded and towed, and when the car owners couldn't pay the fees, the vehicles were sold or given away for free to some officers, Monterey County District Attorney Dean Flippo said Tuesday.

Four King City officers - including the recently retired police chief and the acting chief - have been arrested in the scheme, and two others were also arrested Tuesday on unrelated charges, Flippo said. The officers have been placed on paid administrative leave, KSBW-TV reported.

"There has been a significant breakdown in the internal leadership of the King City Police Department," Flippo said. "It also appears to me that some officers have dishonored their badge."

The six officers account for more than a third of the 17-member force in the agricultural town of 13,000 people about 150 miles southeast of San Francisco. They're expected to be arraigned Monday, CBS Salinas affiliate KION-TV reports.

Early Tuesday morning, teams from the Monterey County sheriff's office, the FBI, the Salinas Police Department and the district attorney's bureau of investigation arrested the officers after a months-long investigation. It began as a response to complaints by residents of corruption and criminal acts within the department dating back at least 3 and a half years, Flippo said.

The probe revealed that the scheme focused on poor Hispanic residents - including many who don't speak English. More than 200 vehicles had been impounded, Flippo said, and 87 percent had been taken in by the same towing company.

In some cases, authorities said, officers simply kept the cars for their own use.

Brian Albert Miller, the operator of the towing company who is also the brother of the acting chief, has also been arrested in the case.

The other two officers arrested Tuesday are facing charges unrelated to the scheme. Officer Jaime Andrade was accused of possession of an assault weapon and illegal storage of a firearm, and Officer Mark Allen Baker was arrested on suspicion of criminal threats.

Investigators said Carrillo was the car scheme's ring leader and that for every 10 to 15 vehicles he impounded, he would receive one free vehicle to keep or sell.

Authorities said Carrillo gave one of those vehicles to Bruce Miller, who was then a police captain and has been charged with accepting a bribe, the Salinas Californian reported.

All seven of those arrested were bailed out of jail within hours, KSBW reported.

"I'm completely surprised by the arrest this morning," Bruce Miller told a KSBW reporter on his way out of jail after posting bail.

He said he had known his department was being investigated but had no idea that he was a suspect. He denied that he had accepted any bribes in the scheme.

"My reputation is soiled," he said. "There's no coming back from this, even if I'm found innocent. People are always going to look poorly upon me."

The windows were steamy at Bailey's Gym, where a handful of people were working out.

Owner Greg Bailey, who also works as a correctional officer at a nearby prison, said he has known Miller for a long time and is skeptical about the charges.

"When the finger gets pointed at you, you've got to dig your feet in and fight your way back," he said.

Bailey said it's not uncommon for immigrants to drive without insurance, and if they are caught, their vehicles are impounded. He said his own car was hit by someone driving without insurance.

Bailey said he is concerned about the sudden, sharp reduction in the police force.

"There was a safety issue prior to this happening," he said, noting gangs are active in the town.

Hector and Laura Vasquez set down a heavy sofa they were carrying in the showroom of their Dor's Furniture store to chat about the arrests.

Speaking in Spanish, Laura Vasquez said it didn't seem right that the officers were bailed out so quickly after her husband described what had happened.

"They're supposed to be keeping us safe, but they're the ones who are breaking the law," she said.

"So that's a little awkward," he said.

The front office of the King City police station was closed Tuesday afternoon.

King City Manager Michael Powers told The Associated Press that Monterey County sheriff's deputies and officers from the nearby cities of Gonzales and Soledad have volunteered to help police the city now that so many of its officers have been taken off duty.

"Obviously, people are in shock, and so is the city staff," Powers said. "But at the same time, we can't tolerate corruption in the police department."

Florida residents choose to wait out Hurricane Ian at home

Woman was left to give birth alone on jail cell floor, lawsuit says
Thanks for reading CBS NEWS.
Create your free account or log in
for more features.
View CBS News In
CBS News App Open
Chrome Safari Continue
Be the first to know
Get browser notifications for breaking news, live events, and exclusive reporting.