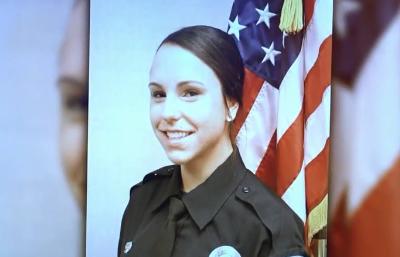 Newly released video shows a former Texas police officer who claimed she was fired for accusing her sergeant of sexual harassment hurt by another officer during an office retirement party. Video given to CBS affiliate KHOU-TV shows former Huntsville officer Kimberly Webb knocked down, then holding her right arm.

According to medical records, Webb's right arm bruised after her sergeant used a foot sweep that made Webb fall on a desk. Video also showed the man demonstrate the move after Webb fell.

"You've got to have an intentional act (to file assault charges) and I just didn't see it," Weeks told KHOU. "It certainly didn't appear that she was injured as I recall from the actions. Nobody else in the room took it that way didn't look like."

In Webb's federal lawsuit filed earlier this year, she accused the city, its police department and police chief of firing her in retaliation for complaints she made against the same sergeant seen in the video.

KHOU reported that Webb's dishonorable discharge from Huntsville PD in 2017 suggests she was an insubordinate, dishonest officer.

But months after being sworn in, Webb claimed fellow officers harassed her with sexual jokes and unwanted advances.

"I got told it was like a contact sport," she told KHOU in February. "If you're in a contact sport, you know there is a certain level of activity that is going to come with that sport. So suck it up and move on."