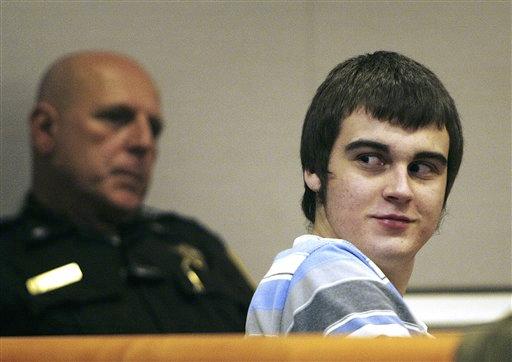 NASHUA, N.H. (CBS/AP) Steven Spader, the teenager accused of killing New Hampshire mother Kimberly Cates and wounding her daughter with a machete during a home invasion, was convicted Tuesday of murder and other charges and was sentenced to life in prison.

Judge Gillian Abramson handed down the maximum sentence against 19-year-old Steven Spader, saying she could go on for days about the depths of his depravity.

The sentence ensures "you will stay in that cage for the rest of your pointless life," he told Spader.

Spader was the first person to go on trial in the October 2009 attacks that left Kimberly Cates dead and her 11-year-old daughter, Jaimie, gravely wounded.

Jurors deliberated for about 90 minutes before returning their verdicts against Spader, of Brookline.

Under New Hampshire law, the first-degree murder conviction carries an automatic sentence of life without parole. Spader also was convicted of attempted murder and other felonies.

Spader, whose birthday is Tuesday, showed no reaction to the verdicts. As the jurors were being polled individually on each of their six guilty verdicts, several glared at Spader and responded emphatically.

Prosecutors say Spader wielded a machete and co-defendant Christopher Gribble used a knife during the attacks in the Cates' Mont Vernon home.

Jaimie, now 12, survived by pretending to be dead, then staggered, covered in blood, to a kitchen phone to call police. A doctor testified she would have died of a punctured lung if she had lost consciousness before summoning help.

Blows that cut off portions of Jaimie's left foot, split open her head and struck her face with enough force to break her jaw had to have come from a heavy and sharp weapon such as a machete, several doctors testified.

During the trial, defense attorney Jonathan Cohen assailed the credibility of three co-defendants who brokered plea deals and testified against Spader. He suggested they, not Spader, were involved in the attacks.

The jury found Spader guilty of both premeditated murder and intentional murder during the commission of a burglary. It also found him guilty of attempted murder, conspiracy to commit both murder and burglary, and tampering with a witness.

Mont Vernon police Chief Kyle Aspinwall, who was present for much of the 11-day trial, said he was satisfied with the verdicts.

"It's been extraordinarily difficult for the town," Aspinwall said.

Gribble is set to go on trial in February.

COVERAGE OF THE KIMBERLY CATES MURDER ON CRIMESIDER