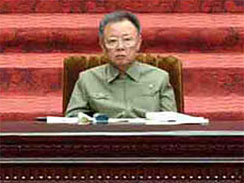 The brother-in-law of Kim Jong Il was promoted to the No. 2 spot in the secretive nation's leadership, a position that could allow him to become the next ruler or a kingmaker who will decide which of Kim's sons succeeds his father.

The announcement was made after a rare parliamentary session reportedly attended by the reclusive Kim, who is believed to have suffered a stroke two years ago. It was difficult to assess the 68-year-old leader's health because Pyongyang's state-run television only showed a long shot of him, sitting behind a desk in the middle of a long line of parliamentarians.

The rubber-stamp parliament, or the Supreme People's Assembly, usually meets once each year to approve bills vetted by the ruling Workers' Party. The body met in April, and no reason was given for holding Monday's unusual second session.

The session came amid worsening economic woes, pressing succession issues and a South Korean campaign to get the United Nations to punish Pyongyang for a ship attack in March that killed 46 sailors. North Korea denies sinking the ship, and state-run media did not say whether parliament discussed the issue.

Lining up a successor to Kim has long been one of North Korea's most pressing issues and it continues to fuel speculation about the mysterious nuclear-armed nation. Analysts said a reshuffle was full of significant signs that the regime was making serious preparations for change.

The most important promotion involved Kim's brother-in-law, Jang Song Thaek, who already had immense power as the head of intelligence and the political overlord of the prosecutor's office, the police and the courts.

Jang was promoted to vice-chairman of the all-powerful National Defense Commission, which makes security policy, and now sits in the No. 2 position, said Yang Moo-jin, a professor at the Seoul-based University of North Korean Studies.

"With this post, he has been given all responsibility and rights to secure a stable structure for future succession," Yang said.

Jang, married to Kim's younger sister, is widely believed to be a key backer of the North Korean leader's third son, Jong Un, who several analysts think will be his father's eventual successor. Many believe Jang may lead a collective leadership after Kim's death and help groom one of the sons for the top job.

"When it comes to Kim Jong Un's succession, it was known that Jang would serve as the guardian," said Koh Yu-hwan, a North Korea expert at Seoul's Dongguk University.

"By officially becoming vice-chairman of the National Defense Commission, he now is in a position where institutionally he can act as Jong Un's guardian, in the event that Kim Jong Il suddenly dies."

Another promotion was announced Monday that appeared to be motivated by succession concerns, analysts said.

The former premier offered a rare public apology in February after a failed currency revamp triggered social unrest and starvation. Last November, citizens were ordered to turn in a limited number of old bills in exchange for new, redenominated currency in an apparent bid to reassert Pyongyang's control over a growing market economy. But the measure left people with worthless bills while inflation surged because state-run shops couldn't keep up with demand.

Choe's promotion to premier raised eyebrows because the job is usually filled by people with economics expertise, Koh said.

"It's notable that Choe, who is more of a political figure, has taken the seat," Koh said. "Appointing a more politically inclined figure to the position can be seen as a move tied to the succession issue."

Koh said that the 81-year-old Choe has reportedly worked with the North Korean leader's youngest son on a construction project and they are apparently close.

The North Korean leader's oldest son, Jong Nam, was once widely believed to be destined to succeed his father. But he reportedly fell out of favor in 2001 when he was caught trying to enter Japan on a fake Dominican passport to visit Tokyo's Disney resort.

On Monday, South Korea's mass-market JoongAng Ilbo newspaper said it tracked down Jong Nam at a hotel in the southern Chinese territory of Macau. The paper showed a picture of a paunchy, unshaven man dressed in jeans and blue suede Italian loafers.

In a brief interview while waiting for an elevator, Jong Nam dismissed reports that he intended to seek asylum in Europe because he lost out in a power struggle with his brother, the paper said.

"I have no plans on moving to Europe. Why would I?" he said. "I could go there for a vacation, but I think you have only heard rumors."