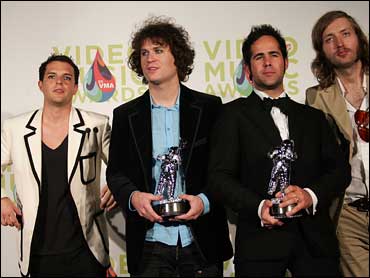 The new wave group The Killers and their lawyer-manager have asked
a federal judge to throw out a $16 million breach-of-contract
lawsuit filed by their former manager.

In documents filed in U.S. District Court on Monday, members of band and their manager, lawyer Robert Reynolds, accused former manager Braden Merrick of Los Angeles of incompetence and dishonesty.

Merrick's lawsuit, filed Feb. 21, alleges that he was fired in May, after the Las Vegas-based band became successful. The two sides had been negotiating a settlement.

In a separate action filed Friday, the band also asked the
California Division of Labor Standards Enforcement to void any
agreements between The Killers and Merrick.

A spokeswoman at the agency's San Francisco headquarters said
Monday she wasn't immediately aware of the band's petition and
didn't know when a hearing would be scheduled.

Merrick's lawyer, Howard King of Los Angeles, said the band's
contract with Merrick, which was due to run through 2007, was in Nevada.

Although he hadn't seen Friday's or Monday's actions, King said
both were expected.

"You gotta take your shot if you don't want to pay what you owe," he said.

Reynolds didn't immediately respond Monday to a request for
comment.

The Killers, formed in 2002, signed with Island Def Jam records
and had a hit with their first release, "Hot Fuss." They recently
began recording a second album.